For years now, Western Digital has been producing 4-channel single package DRAMless NVMe SSDs capable of delivering performance rivaling that of competing 8-channel NVMe SSDs with onboard DRAM. Quite the feat, and it has not gone unnoticed here at TweakTown. With each passing generation of its DRAMless SSDs, WD has been gaining more and more prowess with its DRAMless offerings. The last DRAMless SSD from Western Digital we reviewed, the WD Blue SN570, really delivered great Gen3 performance, as compared with any Gen3 SSD, despite its inherent handicap of being a 4-channel, single package DRAMless configuration.

The primary reason the SN570 can punch above its weight, so to speak, lies in its single flash package. That single flash package is our first taste of BiCS 5 flash technology. Ever since BiCS 4 arrived on the scene, it has proven to be architecturally superior to flash coming from other fabs. Proof positive of this fact is the top three performing SSDs we've tested to date all have one thing in common; they are arrayed with BiCS flash. These three SSDs are not just a little bit better performing than all the rest. They dominate the rest and do so where it matters most. Others may have better sequential numbers or performance that doesn't matter whatsoever, but where overall user experience or performance that matters is concerned, BiCS arrayed SSDs have a clear advantage.

We always knew BiCS 5, all things being equal, would prove to be the best-performing flash of this generation. After all, what do we have to this point? We have BiCS 4 arrayed SSDs outperforming SSDs arrayed with B47R Fortis grade flash. Case-in-point would be the M10P vs. S70 Blade. Both SSDs sport the exact same controller, same amount of onboard DRAM; the difference between them? Just the flash. And BiCS 4 is old, while B47R is brand new and sports faster interface speeds. This can mean only one thing, BiCS is architecturally superior at its core, also meaning that BiCS 5 being superior to BiCS 4 would easily be the performance leader.

Now, we've had two BiCS 5 arrayed SSDs come through the lab to this point, but both have inherent disadvantages that cancel out the true performance of BiCS 5. Problem with the WD Blue SN570 being primarily its Gen3 interface. The 8TB Rocket 4 Plus, its inherently slower 1024Gbit flash. Even the drive we have on the bench today is somewhat handicapping its BiCS 5 flash package with a 4-channel controller, and to some extent, lack of onboard DRAM is doing the same.

However, the WD Black SN770 we are testing today is a Gen4 SSD running on faster 512Gbit BiCS 5 flash, so it should get us closer to seeing the true performance potential of BiCS 5. With 4-channels, it isn't going to deliver 7,400 MB/s sequential throughput, but remember, sequential speed is not what makes an SSD fast. 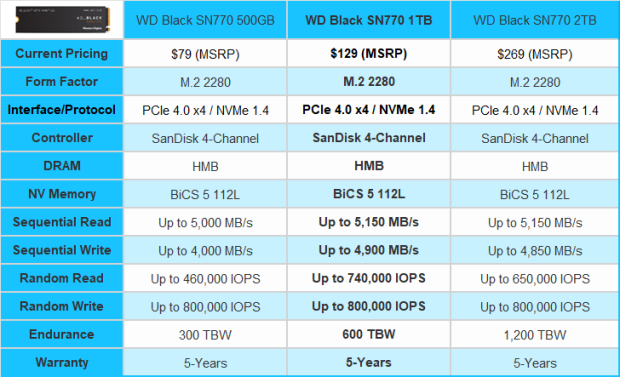 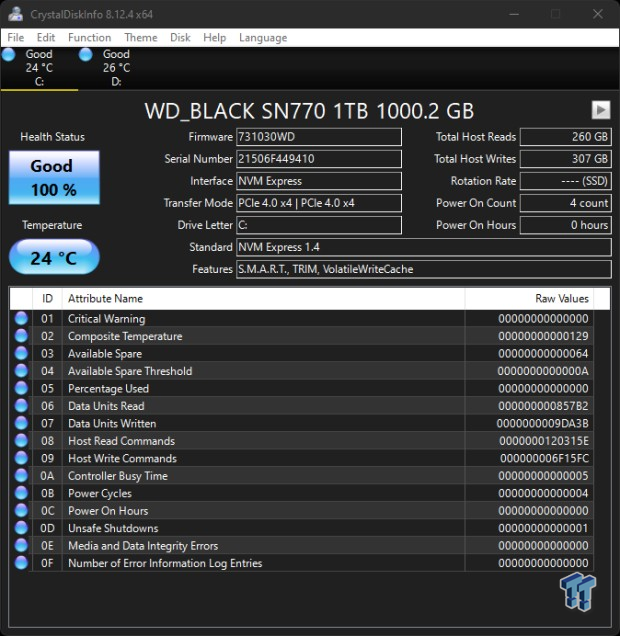 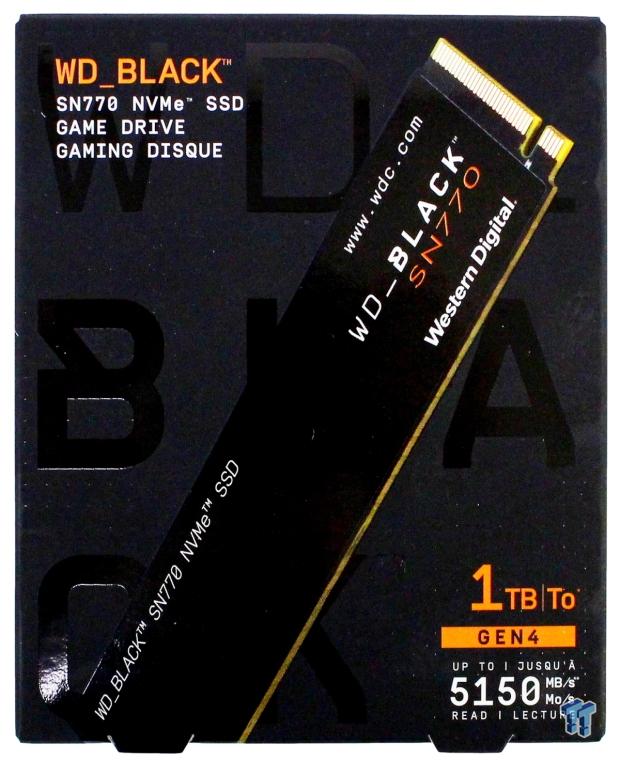 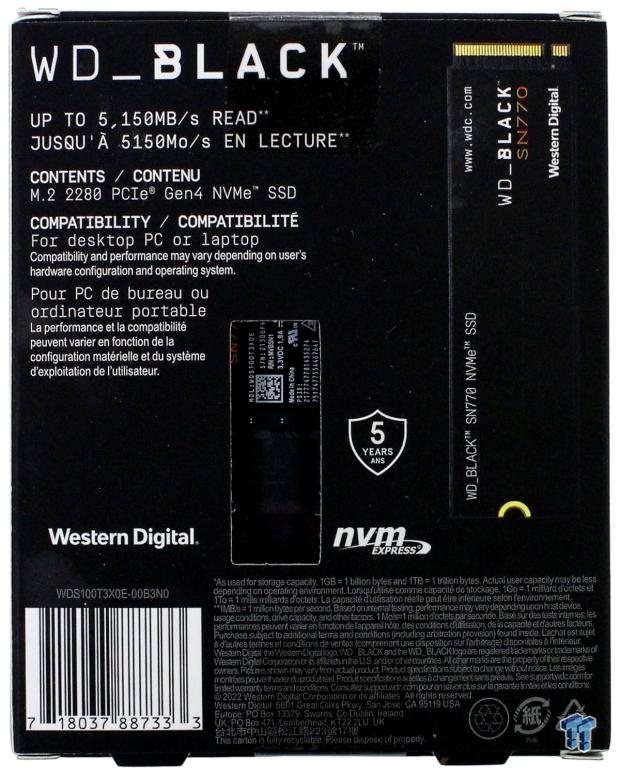 Western Digital's newest DRAMless SSD follows right along with what we've seen physically with its DRAMless offerings for some time now. Single-sided 2280 PCB with a tiny SanDisk 4-channel controller upfront, some sort of coprocessor to the right of the controller, and a single flash package at the rear of the PCB. It sure doesn't look like it would be fast, but looks can be deceiving. 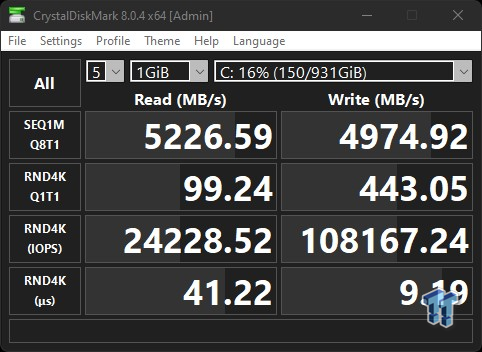 Currently, this is about the max sequential speeds attainable with a 4-channel controller. Sequential speeds surpass those of the ATOM 50, which is the first 4-channel Gen4 DRAMless SSD to hit retail channels. The ATOM 50 is another SSD that we can compare to the SN770 because it is similarly configured, with the main difference being the ATOM 50 is arrayed with 1,600 MT B47R flash. Almost the perfect comparable SSD to demonstrate which flash offers better performance BiCS or B47R, and they are priced about the same as well.

We don't much care about sequential speeds, but we do care very much about 4KiB Q1T1 random read performance, as it is a very good indicator of workload performance as well as gaming performance. Not that the highest always performs better. That's not how it shakes out but rather to see if this important performance metric is being executed at a high level. The SN770 at 99 MB/s is among the best ever, so that is a great indication of good things to come when we get to performance that matters like gaming and consumer workloads. Performance there should be quite good. The ATOM 50 gets 101 MB/s and the win here. 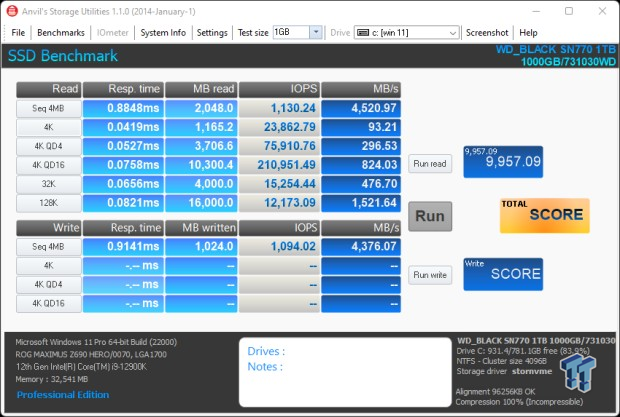 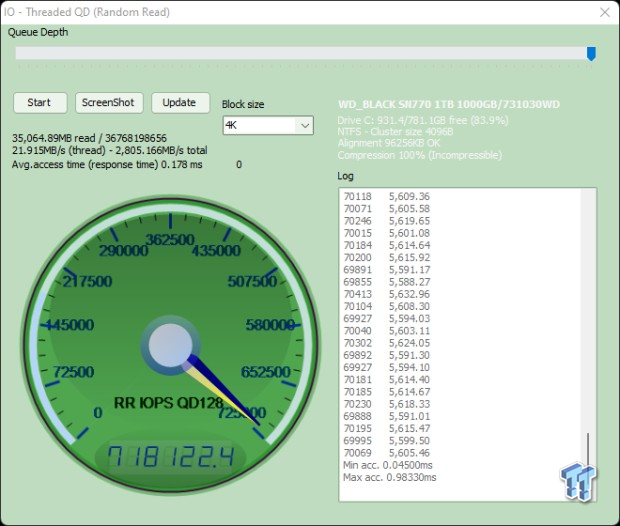 Almost 10K is simply amazing for a DRAMless 4-channel SSD. The SN770 edges out the ATOM 50 here. It is also beating a whole host of Gen4 SSDs capable of 7,400 MB/s throughput. Amazing. We need to mention that the SN770 is cranking out BY FAR the best 32K and 128K numbers we've seen from any flash-based SSD. Hard to believe this is a 4-channel DRAMless SSD with a single package flash array.

Moving over to IOPS at QD128, we see a stunning performance by the SN770. It's beating the ATOM 50 easily and more impressively; it's beating a bunch of 8-channel SSDs arrayed with B47R flash. Random read is performance that matters. Impressive. 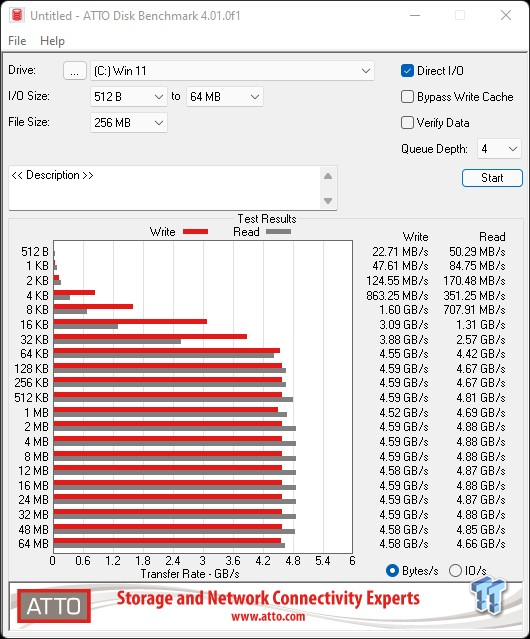 ATTO doesn't convey performance metrics that matter a whole lot, so we won't elaborate much here other than to say the SN770 is again beating the ATOM 50 and even the 980 Pro as it slots in just below its older cousin, the 7,000 MB/s capable SN850 on our 128K read chart. 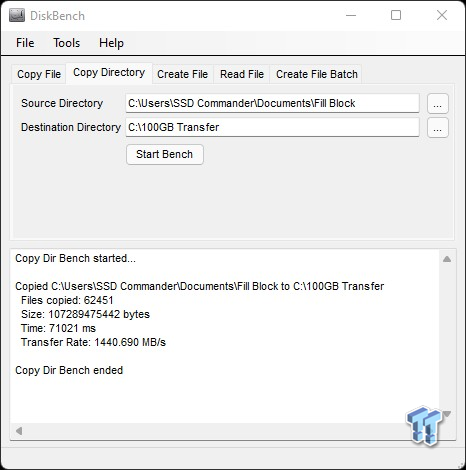 The SN770 impresses here mightily by quickly digesting 100GB of a crushing mix of data composed of more than 62K files. This time, the ATOM 50 slots in directly above the SN770. Both of these Gen4 4-channel drives are beating a bunch of 7,000 MB/s capable 8-channel SSDs. Impressive. 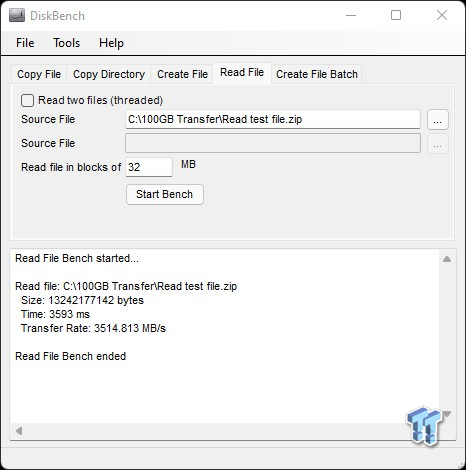 Even though the SN770 is handicapped here by its 4-channel controller, this is a very impressive result if we dissect it a bit. First, the SN770 is beating the ATOM 50 by a significant margin. Second, we will point out that the SN770 is the fastest of the Gen4 5,000 MB/s capable SSDs, even outpacing several 8-channel drives. 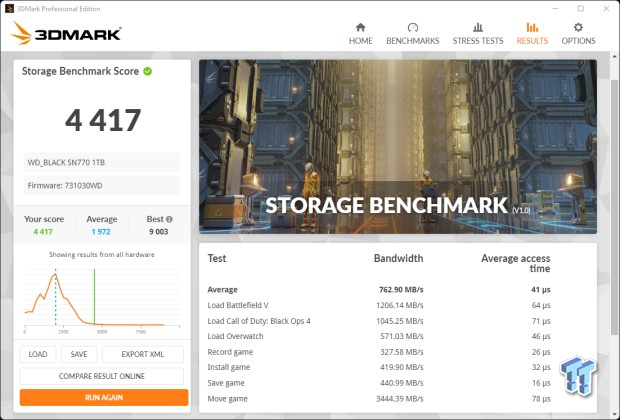 Gaming is a performance metric that matters to the majority of DIY consumers, especially to the enthusiast crowd that TweakTown caters to. This is where benchmark results start to matter, and this is where we begin to see clearly that the SN770 is something special. This is what BiCS brings to the table. Here is where more channels have always meant better performance, as clearly demonstrated by where the ATOM 50 and Intel 670p place on this chart. 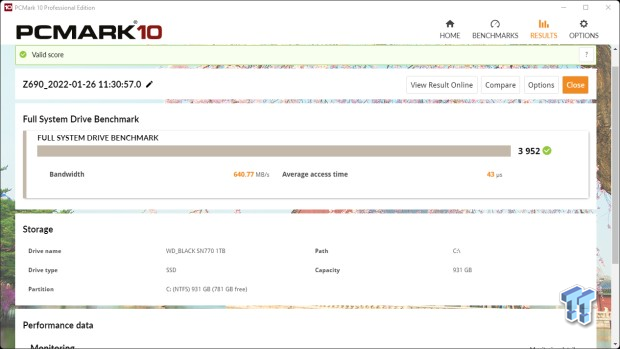 Considering what the WD Black SN770 is, this is easily the most impressive performance for any SSD at any time. Are you kidding? A 4-channel DRAMless SSD arrayed with one flash package handles heavy workloads better than any SSD available in the Americas, including its cousin, the supremely powerful WD Black SN850. Incredible. We will point out that this chart also clearly demonstrates that BiCS flash is the superior performer, even older BiCS 4 like we find on the WD Black SN850 and M10P. Performance that matters. 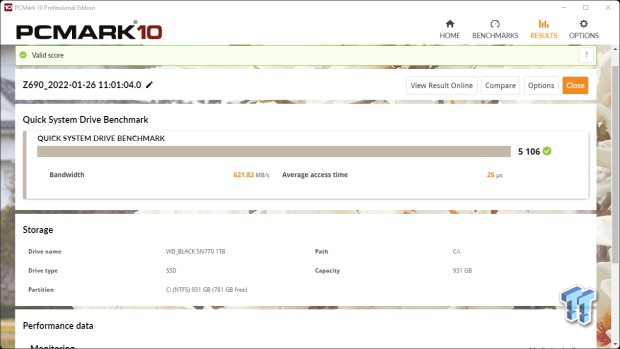 But wait, there's more. Moderate consumer workloads, the kind that many SSDs, even those with 7,400 MB/s sequential throughput, can struggle with are no problem whatsoever for the WD Black SN770. As we see it, this cements into fact our long-time assertion that BiCS is the best performing TLC flash on the planet. Remember, in this case, BiCS 5 is flexing on everyone with one arm, or 4-channels, tied behind its back, so to speak. Performance that matters.

Take a look at where the similarly configured ATOM 50, which is plenty powerful in its own right, places on our chart. We see that as almost a perfect gauge of how B47R compares with BiCS 5.

We had no idea what we had in the WD Black SN770 when it arrived at the lab doorstep. We didn't even bother opening it until a few days later when we were alerted by friends in the review community that this drive was different, something special. A 4-channel DRAMless SSD that is beating all the 7,000 MB/s eight-channel SSDs where it matters? Impossible, right? It turns out it's not only not impossible, but it's also a fact.

We rank SSDs in terms of overall user experience (performance where it matters most) as expressed by PCMark 10 storage and 3DMark gaming storage tests. We consider a user experience score of 11K or more to verify an SSD as a TweakTown Elite performer. As improbable as we thought it would be, here it is, our performance champion for SSDs available in the Americas is a value-priced 4-channel DRAMless SSD. Incredible. 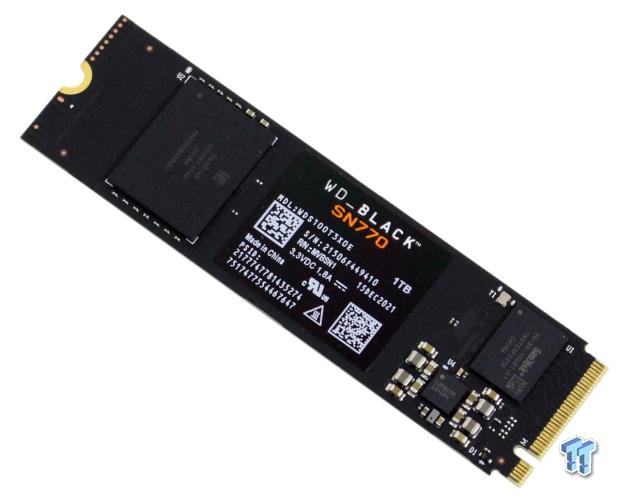 As we see it, the SN770 will shake the SSD world to its core. Western Digital managed to pull off something that we, in our wildest dreams, never imagined possible. Congrats on this feat, WD. We can't wait to see what a full-blown 8-channel SSD like the SN850 can do with a BiCS 5 flash array. But let's not get ahead of ourselves and go ahead and talk about the only complaint we have with the SN770.

It is DRAMless, and because the PS5 doesn't do HMB (Host Memory Buffer), the SN770 isn't well suited for PS5 use. Admittedly, that's a bit of a stretch to find something to complain about, but that's all we got.

Simultaneously our value champion and performance champion, the WD Black SN770 is something special indeed.