A short time ago, Corsair went all-in on the performance storage front with its MP600 Pro XT. At the time, it was the second SSD to appear on the scene arrayed with Micron 176 Layer B47R Fortis grade flash, with Seagate's FireCuda 530 being the first. The MP600 Pro XT put Corsair back on top in terms of having a true performance champion.

The MP600 Pro XT dazzles with its massive throughput of up to 7,400 MB/s sequential read and up to 7,000 MB/s sequential write. Now that amount of throughput generates a good amount of heat, making a heat sink of some sort virtually mandatory, so naturally, Corsair, like they always have done with Gen 4 SSDs, includes a pre-mounted heat sink with its MP600 Pro XT SSDs.

Corsair went all out with the heat sink for the MP600 Pro XT. The heat sink they provide is, to this day, the heaviest, most aggressive looking, and most effective preinstalled heat sink we've come across. There is only one problem with it, though, it is too big to fit properly in a Sony PlayStation 5 M.2 storage expansion slot. With the popularity of the PS5 and the interchangeability of M.2 SSDs between PC and PS5, SSD retailers need to have something on offer that meets all Sony's stated requirements for speed and for heat sink compatibility.

That's exactly what we have here in Corsair's latest Gen4 x4 NVMe SSD, the MP600 Pro LPX. This SSD is essentially the same as Corsair's supremely powerful MP600 Pro XT but outfitted with a more compact preinstalled heat sink that perfectly fits the PlayStation 5's M.2 storage expansion slot. Like its predecessor, the MP600 Pro LPX, it can crank out more than 7,400 MB/s throughput under the right conditions: 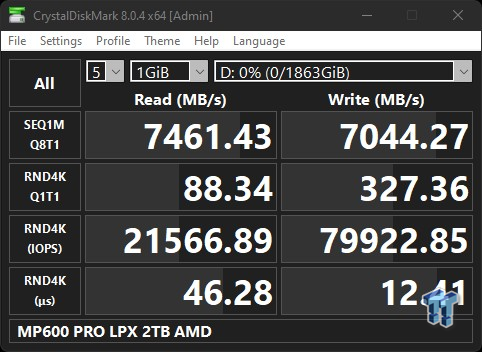 The right conditions here being we are running this test on our AMD X570 system with a 5900X 12-core CPU. This hardware combo is capable of extracting every drop of sequential throughput from Phison E18 powered SSDs arrayed with B47R flash. Throughput is nice and all, but we prefer the superior random performance offered by Intel-based systems like our Z690 Hero with 12900K CPU, which is our current choice for SSD testing. 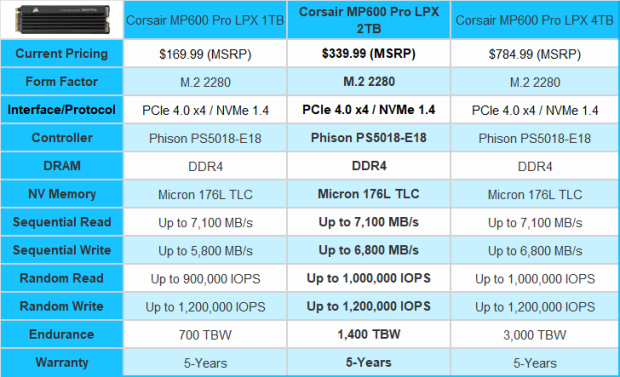 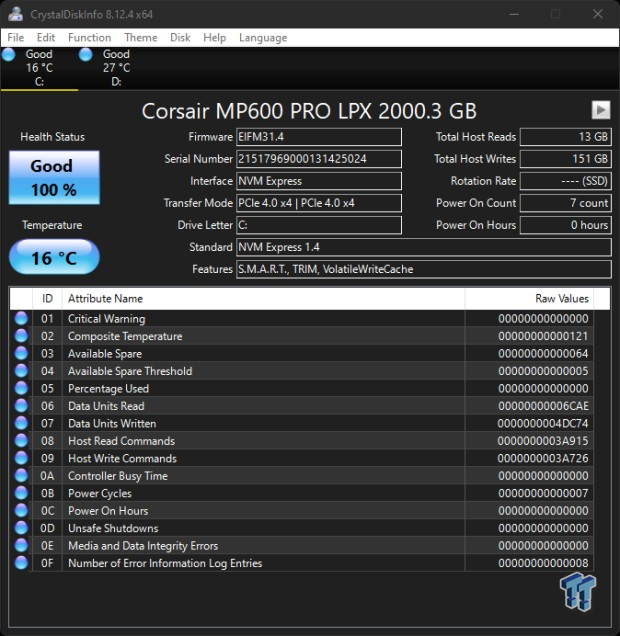 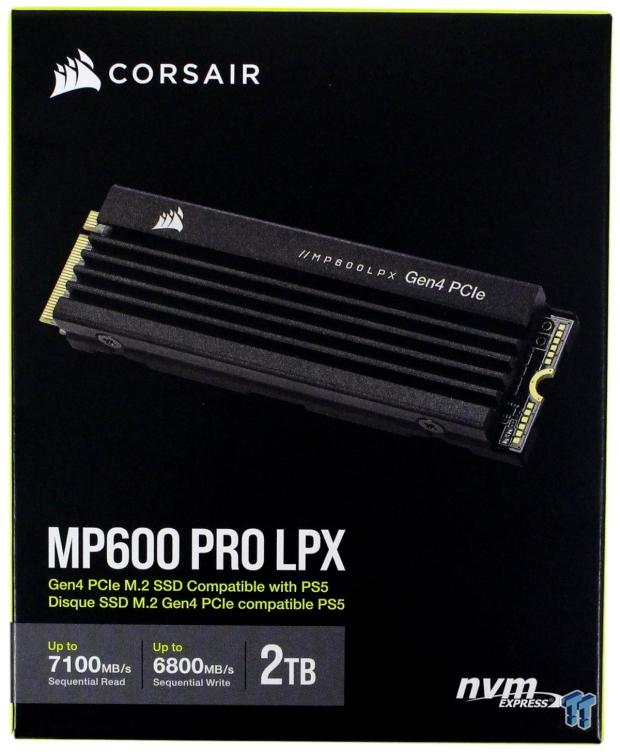 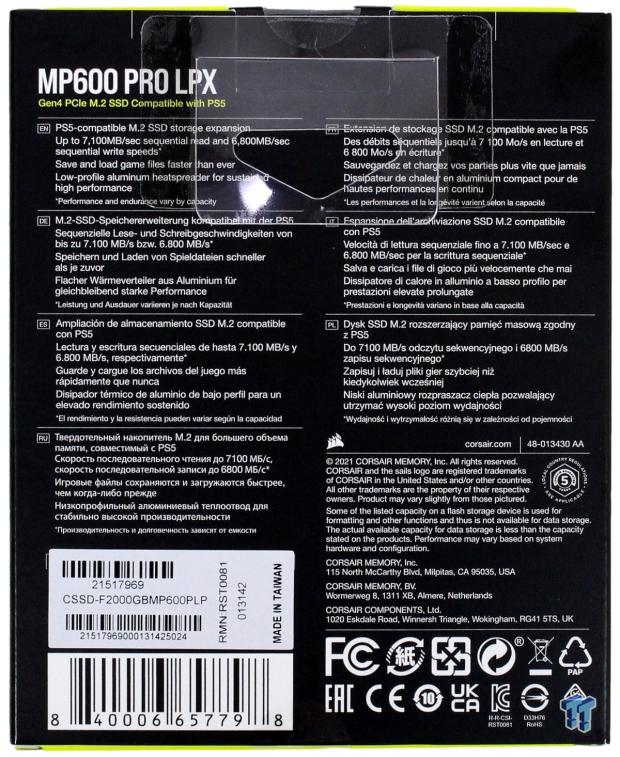 Corsair, as they tend to be, is a bit conservative with factory performance specs. We are fine with this approach instead of what we see from some lesser brands that vastly overstate performance capabilities.

The MP600 Pro LPX, as it is with all Corsair SSDs, is user-serviceable with Corsair's complimentary SSD Toolbox software. Click the link and navigate to download Corsair's SSD Toolbox. With the toolbox, you can perform many useful functions, including cloning to your Corsair SSD.

With Sony's wildly popular PlayStation 5 console now enabled for M.2 NVMe SSDs to be used as fast storage expansion, we include results for PS5 compatible SSDs we test as a part of our reviews going forward. We are using the newest PS5 hardware and software versions. 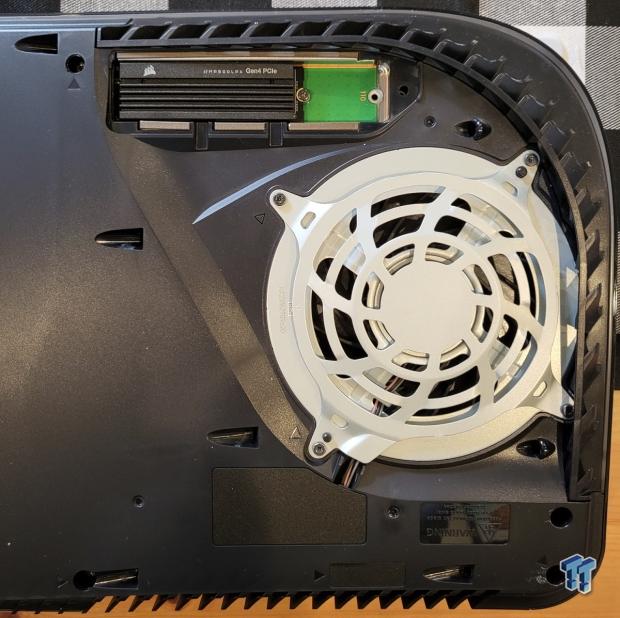 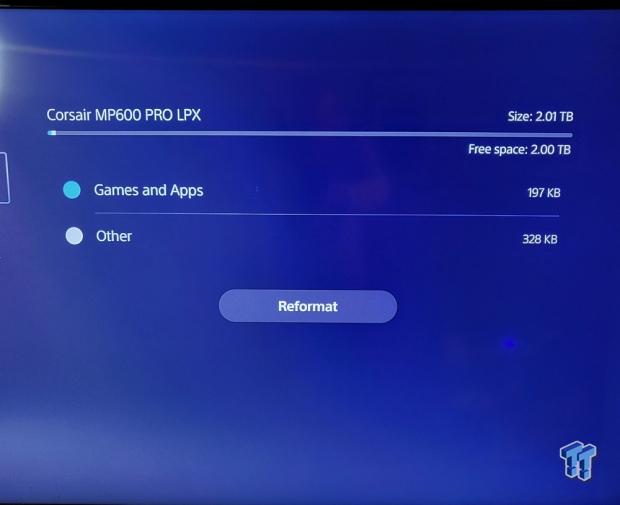 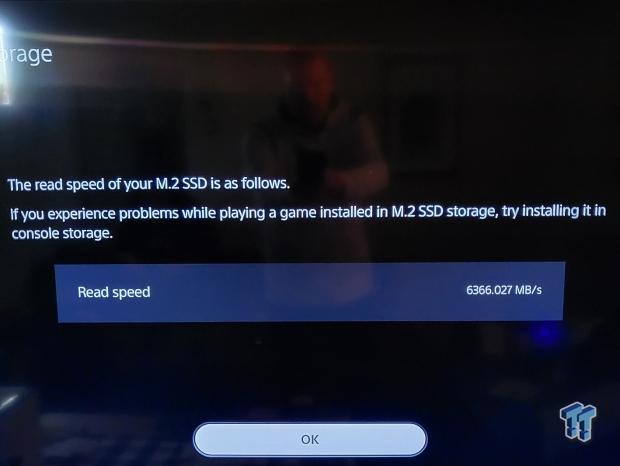 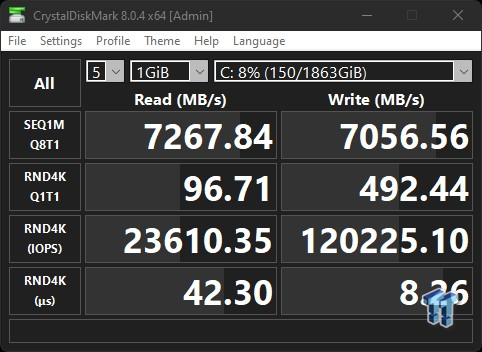 As mentioned, the MP600 Pro LPX has the very same Phison E18 controlled SSD arrayed with B47R Fortis grade flash as its older sibling, the MP600 Pro XT, tucked under its heat sink, so we expect to see very similar results throughout this review. There is a difference in firmware, though, with the MP600 Pro LXP sporting a newer revision. The newer firmware does seem to offer slightly better performance as the LPX beats the XT across the board according to CDM; however, the advantage is within the margin of variations between runs, so let's not read too much into this just yet. Steller results, about as good as they get. Impressive. 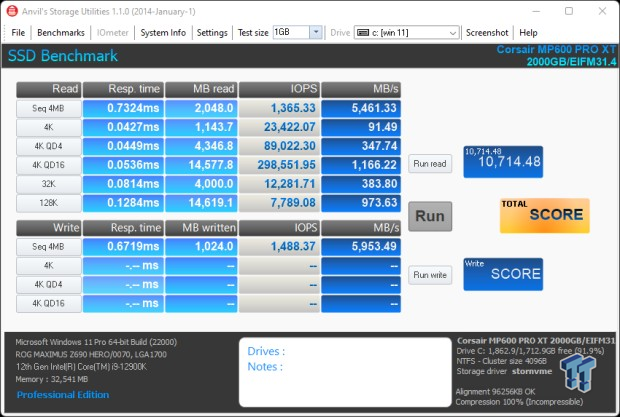 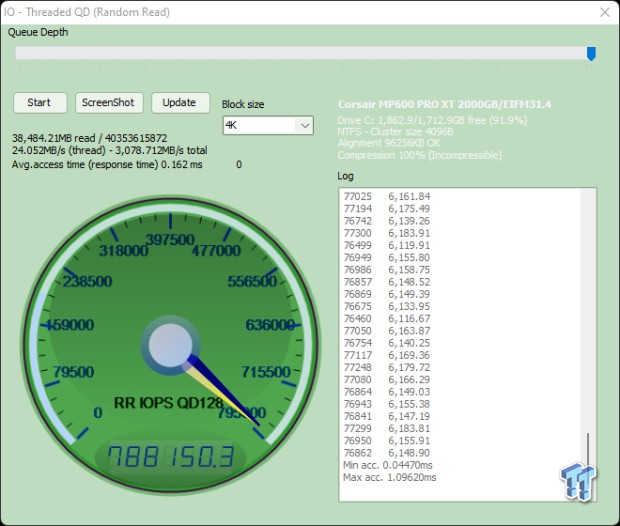 We love it anytime an SSD scores 10K or better here. The MP600 Pro LPX drops an excellent score here, although it slots in slightly below its older cousin, the MP600 Pro XT. Looking at max IOPS, we see just the opposite. 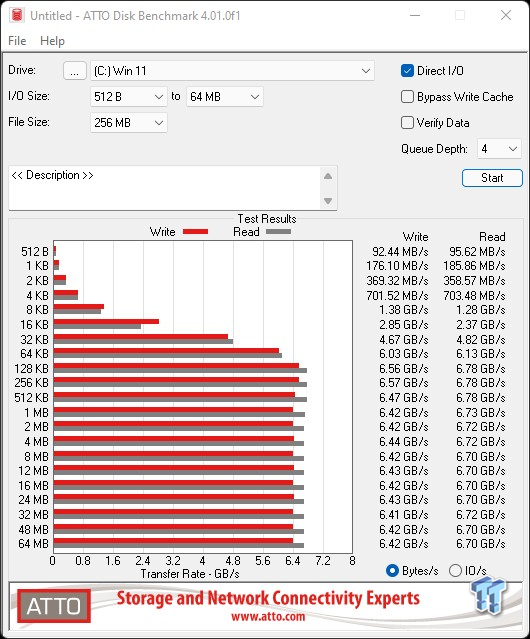 The top portion of these charts are populated exclusively with E18 powered SSDs. And of those E18 controlled SSDs, the MP600 Pro LPX ties for the second-best ATTO 128K write performance we've ever extracted from any consumer SSD. Outstanding. 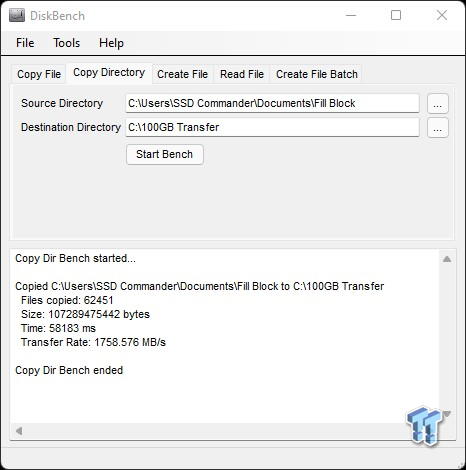 As we move away from synthetic testing, the MP600 Pro LPX continues right along with its top-of-the-food-chain performances. Here we find the LPX slotting in again just under its older sibling with the fourth-best 100GB write transfer rate we've seen to date. And this is not your ordinary 100GB of data; ours is a crushing mix of data composed of more than 62K files. Outstanding. 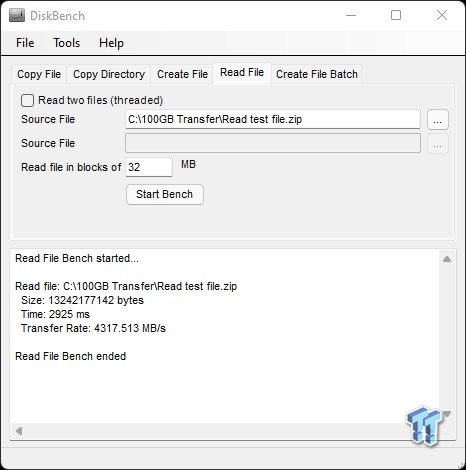 Serving data to the host is something the MP600 Pro LPX does incredibly efficiently. It bests the MP600 Pro XT here by delivering the fourth-best result for an E18 controlled SSD to date. Potentially this is a firmware advantage over its older cousin.

UL's newest 3DMark SSD Gaming Test is the most comprehensive SSD gaming test ever devised. We consider it superior to testing against games themselves because, as a trace, it is much more consistent than variations that will occur between runs on the actual game itself. This test is, in fact, the same as running the actual game, just without the inconsistencies inherent to application testing. 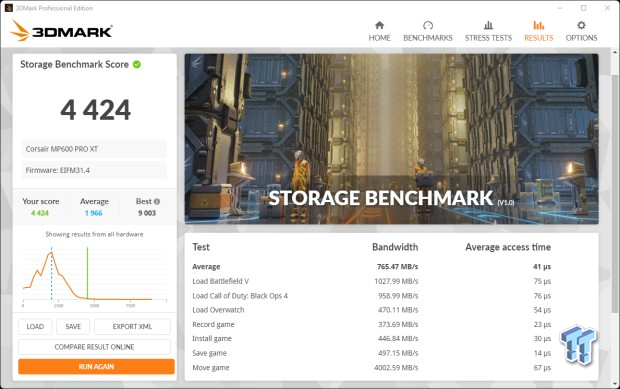 Gaming is a performance metric that matters to the majority of DIY consumers, especially to the enthusiast crowd that TweakTown caters to. Exactly the kind of result we want to see from an SSD marketed at the gaming community. The LPX again beats the XT delivering the third-best result we've seen from an E18 controlled SSD and sixth-best all-time for a flash-based SSD. PC or PS5, the MP600 Pro LPX is about as good as it gets. Performance that matters. 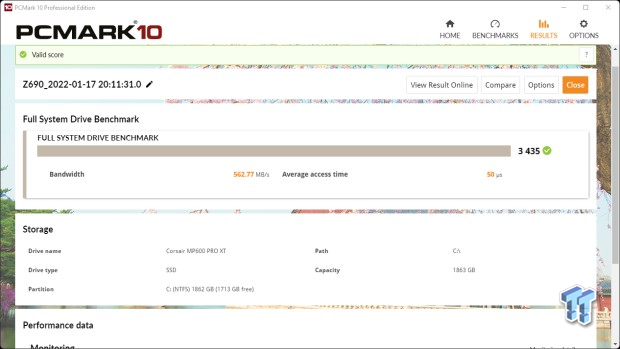 We are looking for a minimum 500MB/s storage bandwidth along with 3000 points here. The MP600 Pro LPX gives us more than we are asking for here. Again, performance where it matters most. Impressive. 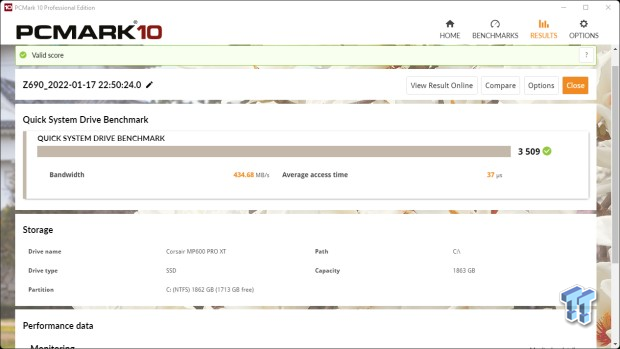 Although not a head-turning score, because E18 controlled SSDs are incapable of impressing here, we are satisfied enough with the result, as it should be enough to push the MP600 Pro LPX into TweakTown Elite territory.

Corsair has been a purveyor of premium SSDs ever since SSDs became a thing. Their newest, the MP600 Pro LPX, is a fine addition to its portfolio. This thing is fast in a PC and fast in a PlayStation 5. More importantly, in terms of console storage expansion, the MP600 Pro LPX stays nice and cool even under the most demanding gaming sessions. It meets all PS5 compliance specifications and then some.

We rank SSDs in terms of overall user experience (performance where it matters most) as expressed by PCMark 10 storage and 3DMark gaming storage tests. We consider a user experience score of 11K or more to verify an SSD as a TweakTown Elite performer. As expected, the MP600 Pro LPX earns its place among the Elite. 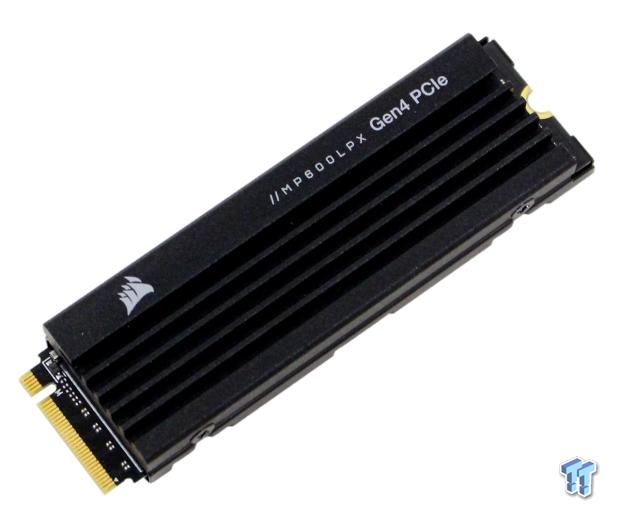 PC or PS5, the MP600 Pro LPX is about as good as it gets. And with the 2TB model we tested today sporting the overall best pricing we've seen for any B47R Fortis grade arrayed E18 controlled SSD with preinstalled heat sink, it presents an incredible value as well. Fast as hell, TweakTown Elite and priced oh so right, Corsair's MP600 Pro LPX has earned our highest award.

Fortis grade flash, super effective PS5 heat sink and value priced, this SSD has it all.