The Momentus XT solid state hybrid drive, a 7200RPM drive with up to 500GB of capacity, boots up to 50 percent faster than traditional 5400RPM drives and sets new benchmarks for real-world system performance for laptops and gaming systems. Seagate's Adaptive Memory technology is key to the drive's speed, optimizing its performance by moving frequently used information into the 4GB of onboard solid state memory for faster bootup and application access. 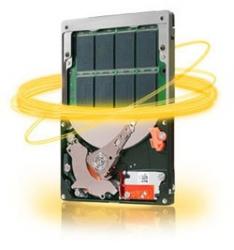 "Seagate's shipment of its one millionth Momentus XT drive is just the beginning of a bright future for solid state hybrid drives," said John Rydning, research director at IDC. "Fast, capacious, and economical hybrid HDD and NAND flash storage solutions like the Momentus XT drive will be found in roughly 25 percent of all new PCs shipped in 2015."

The problem with today's high-performance SSDs for mobile computing is that they cost as much as 10 times more than hard disk drives of the same capacity, with the price of a 250GB SSD outstripping even the cost of many laptop PCs. Most consumers and system builders are unwilling or unable to pay the high price for the greater speed of SSDs. The Momentus XT drive delivers SSD-like speed at a fraction of the cost and more capacity options.

"With Momentus XT hybrid drives, laptop users don't have to make trade-offs when buying a system based on speed, cost or capacity," said Rocky Pimentel, Seagate executive vice president, chief sales and marketing officer. "We're delighted that the Momentus XT drive has been enthusiastically received in the marketplace and look forward to introducing the next generation of the product, which will give consumers an even better, faster computing experience, before the year is out."

Momentus XT drives are offered in these laptops at Best Buy:

Momentus XT drives are also available in these systems:

Momentus XT drives can be found at these online retailers: