Taipei-MSI will be displaying its new generation of notebook creations from 6-9 January at the 2011 Consumer Electronics Show (CES) in Las Vegas, Nevada, in the USA. Its booth number 30559, will be located in Convention Center South Hall 3. Laptops to be shown will include machines from the G Series of gaming computers, F Series ultimate performance NBs, the C Series of stylish multimedia notebooks, the X-Slim Series which features ultra-thin, ultra-light laptops, Wind U netbooks, and WindPad tablets. Worth noting, MSI will be showing the GT680-the fastest notebook computer on the planet. It smashed speed records in PC MARK Vantage tests. 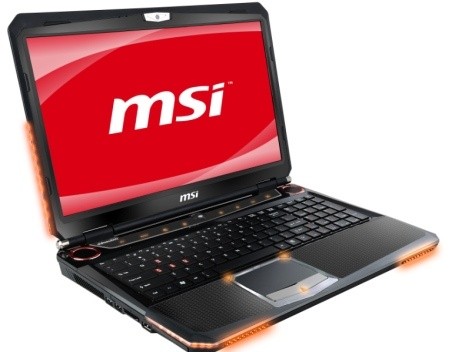 The fastest gaming notebook ever to be unveiled at CES 2011
Driven by a desire to "insist on the best," MSI will be exhibiting a number of powerful G Series gaming notebooks at 2011 CES, including the top end GT680-the "fastest notebook on the planet." When tested with PC MARK Vantage tools, it attained a speed of 18,162 points. It has the fastest operating system in the world, performing some three times faster than the average speed of high end gaming books currently on the market.

Kuo added that another reason that the GT680 is the fastest NB in the world is the fact that it uses MSI's own TDE+ (Turbo Drive Engine+ technology) which allows both the CPU and GPU to turbo simultaneously. Just one touch of the luminescent Turbo hot key located above the keyboard throttles up performance, making the MSI GT680 the king of gaming books.

New platforms in MSI F, C, U, X Series to debut at CES
In addition to the G Series, MSI will be showing the F Series of ultimate performance notebooks and C Series of classic multimedia notebooks at CES. The F Series, which boasts Intel latest generation processing platform, offers ultimate performance and highly responsive systems software. What's more, the F Series NBs to be shown at CES are all equipped with THX TruStudio Pro smart wrap around sound which up until now was only available in cinemas, providing faithful sound regardless of music type or frequency band. In addition to Intel's high performance CPUs, the all new MSI C laptop series comes equipped with SRS PC Sound for a rich, realistic cinematic experience.

In the area of light, easy-to-carry computers, MSI will be unveiling the U270 and U160DX from the U Series and the X370 from the X-Slim Series. The U160DX comes with the Intel Atom N550 duo core processor, while the U270 and X370 will sport AMD's new generation processing platform, greatly enhancing system computing performance for those who want power in a small package. In addition, in an era in which multimedia devices, such as mobile phones, tablet notebooks, and portable music players, are becoming increasingly common, all MSI products being displayed at CES 2011 will come equipped with MSI's exclusive i-Charger technology, which pumps more current through USB ports to greatly enhance recharge efficiency. Furthermore, MSI NBs with USB 3.0 can recharge as much as three times faster, giving your multimedia devices less down time.

New generation MSI WindPads to make appearance at CES
At next year's CES, MSI will be showing off its WindPads, its newest generation tablets with Win-Tel and Android platforms. These two tablets come equipped with a G-Sensor gravity detecting device, an ALS light sensor, and Wi-Fi. These two chic machines, which will be making their debuts at CES 2011, are testimony to MSI's industry-leading capabilities in terms of innovative R&D and stylish design.