* Generally Accepted Accounting Principles.
** Excludes goodwill and other intangible asset impairment, stock-based compensation, amortization of acquisition-related intangibles, purchase accounting effect on inventory, restructuring of operations and other items, net, write-down of debt and equity securities and gain on repurchase of convertible subordinated notes. It also excludes the income tax effect associated with the above mentioned items.

"Despite some isolated customer inventory adjustments late in the quarter that modestly affected our sequential revenue growth, tight operating expense control and higher gross margins enabled us to deliver a solid bottom-line performance," said Abhi Talwalkar, LSI president and chief executive officer. "While improving end market demand for enterprise IT products continues to bode well for us, our outlook for the third quarter is one of tempered optimism as macro-economic conditions appear to be somewhat fluid at the present time."

Bryon Look, LSI CFO and chief administrative officer, said, "We delivered sound financial results in the second quarter. First-half operating cash flows nearly tripled from the year-ago period while net cash improved by 28% on the same basis. We also repaid all our remaining debt and continued to purchase shares of the company's common stock through our previously announced share repurchase program." 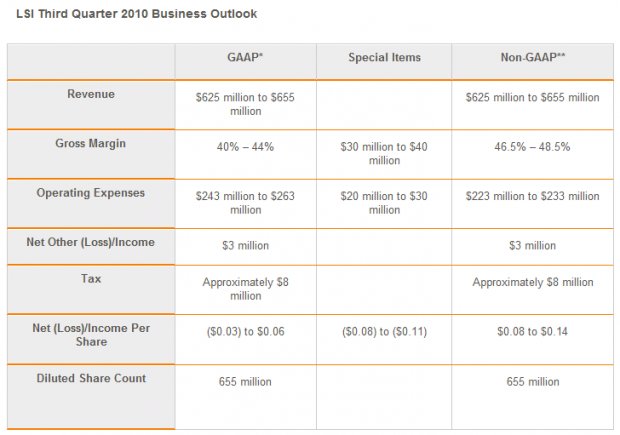 Capital spending is projected to be around $15 million in the third quarter and approximately $55 million in total for 2010.

Depreciation and software amortization is projected to be around $26 million in the third quarter and approximately $104 million in total for 2010.