million, or $0.06 per share, and operating income of $125 million. The company reported non-GAAP net income

and graphics capabilities resulted in customers launching a record number of new mobile and desktop platforms.

Gross margin was 45 percent
Cash, cash equivalents and marketable securities balance at the end of the quarter was $1.90 billion,

approximately flat from the first quarter.
During the quarter, AMD used $200 million to repurchase $206 million principal amount of our 6.00 percent

increases were primarily driven by record notebook microprocessor and chipset unit shipments.
Operating income was $128 million, compared with $146 million in Q1-10 and an operating loss of $67 million in

at Computex. Fusion APUs combine the microprocessor and graphics processor unit (GPU) onto a single piece of

silicon to deliver breakthroughs in visual computing, user interface and performance-per-watt while enabling

plans to adopt the Opteron 4000 Series for their product offerings.
AMD microprocessors power the highest-performing supercomputer in the world and three of the top four systems

in the most recent TOP500 Supercomputers list. AMD is the only company with both microprocessor and GPU

increase was driven by record GPU unit shipments, partially offset by a decrease in ASP. The year-over-year

increase was driven by an increase in GPU shipments and ASP. Operating income was $33 million, compared with

"Cautionary Statement" below.
AMD expects revenue to be up seasonally for the third quarter of 2010.

its second quarter financial results. AMD will provide a real-time audio broadcast of the teleconference on

the Investor Relations page of its Web site at AMD. The webcast will be available for 10 days after the 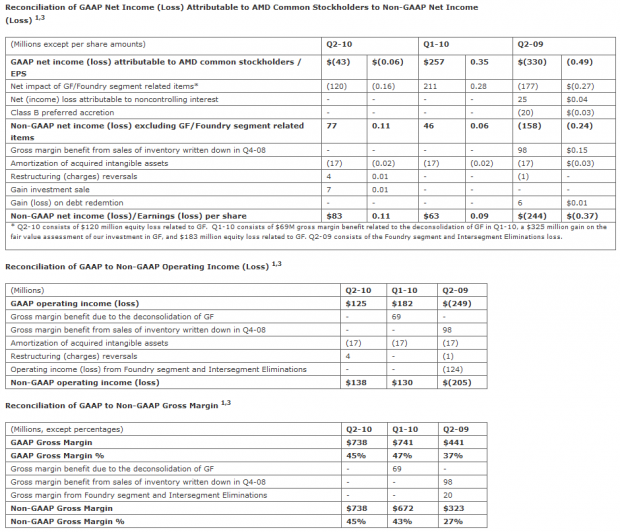