12th April 2019 - Today is a big day for Singularity Lab and for everyone who dreams about playing an awesome, old school arena shooter, or who wants to battle it out while racing! The brand new game, JetX, promises to be the game to satisfy everyone. 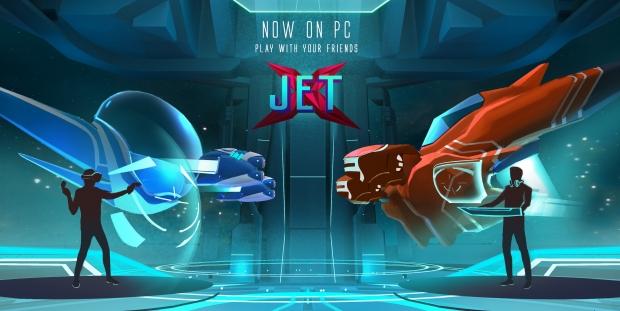 One of the main features of JetX is the many different game modes, giving players the freedom to play the game in the way that they find most enjoyable. Whether they simply want to race, take part in an arena shooter, fight against PvE bosses, or take on all of the challenges at once, the choice is theirs to make!

If you have already heard of JetX, it is time for you to immerse yourself in the world of cosmic speed and battles, pumped full of adrenaline, and learn why we gave the game long descriptive titles such as "racing shooter battle arena in zero gravity".

What are the main key features of JetX?

JetX is highly competitive and favours pure player skill over pay-to-win tactics. The game offers players a new and unique experience that fuses the old-school hard-to-master games with the more modern easy-to-start games.

For more details about JetX:

Singularity Lab is an interactive laboratory that develops games and VR applications. Our team, all hardcore gamers, want to make fair games where player skill is the most important feature.

As part of the Singularity Lab project, FIBRUM acts as the publisher for JetX on all platforms.