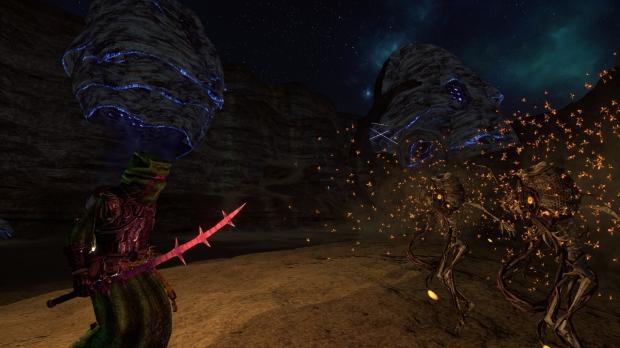 A treacherous journey awaits players in the fantasy world of Outward, but you don't have to brave it alone. Tackle the dangers that lie ahead together with drop-in and drop-out local or online multiplayer. Will one player act in support, carrying the heavy equipment and loot while the other player handles combat? Or will you choose to explore the world separately to cover more ground? Whether you choose to play in local split screen or online with a faraway friend, the world and its hostile inhabitants will grow stronger with another player so plan your steps accordingly.

OUTWARD is a hardcore RPG that tempers fantasy elements with realism... but with the right preparation, you will be able to overcome most challenges that OUTWARD will throw at you.

Stay up-to-date with the latest Outward news and information on the official website:https://www.ninedotsstudio.com/outward.

Deep Silver develops and distributes interactive games for all platforms. The Deep Silver label means to captivate all gamers who have a passion for thrilling gameplay in exciting game worlds. Deep Silver works with its partners to achieve a maximum of success while maintaining the highest possible quality, always focusing on what the customer desires.Deep Silver has published more than 200 games since 2003, including its own brands like the open world extravaganza Saints Row, the zombie action franchise Dead Island, and the grim post-apocalyptic future of the Metro series. Deep Silver also owns the development studios Deep Silver Dambuster Studios in Nottingham, UK; Deep Silver Fishlabs in Hamburg, Germany, and Deep Silver Volition based in Champaign, IL, USA. For more information please visit www.deepsilver.com

Koch Media is a leading producer and distributor of digital entertainment products (software, games and films). The company's own publishing activities, marketing and distribution extend throughout Europe and the USA. The Koch Media group has more than 20 years of experience in the digital media business, and has risen to become the number one distributor in Europe. It has also formed strategic alliances with numerous games and software publishers: Bethesda, Capcom, Kaspersky Labs, NC SOFT, Sega, Square Enix and Tecmo-Koei, etc. in various European countries. With Headquarters in Planegg near Munich/Germany, Koch Media owns branches in Germany, England, France, Austria, Switzerland, Italy, Spain, the Nordic regions, Benelux and the United States.

At Nine Dots we create games aimed at hardcore gamers with sophisticated tastes. We specialize in making games that would normally be out of scope for a studio of our size by refining our management practices and by focusing on creating the best working environment for our developers.The company is based in Quebec City, has been around for over 6 years and is currently working on its third game. Our previous title, GoD Factory: Wingmen, was released on Steam in August 2014.

Maximum Games ranks as a top 20 global video game publisher of interactive digital entertainment spanning all genres and supporting multi-platforms. The company's mission is to provide a proven and strong hands-on approach to publishing, marketing and distribution. Established in 2009, the company is led by female entrepreneur Christina Seelye, a seasoned executive of digital consumer products and channel marketing.

Under Seelye's leadership, the company has been recognized with numerous awards such as "Fastest Growing Tech Company" by American Business Awards and has made the Inc. 5000 list of Fastest Growing Private Companies for the past four years. Maximum Games has offices in both the US and UK, and continues to expand its scope of global publishing and distribution via direct reach and strategic partnerships. For more information on Maximum Games, visit the company's website at www.maximumgames.com.