OSLO, Norway - March 7th, 2019 - Funcom is excited to announce that Conan Exiles will enter its first-ever Steam Free Weekend, running from March 7th to March 10th. Simultaneously, the game is available for purchase at a 50% discount. Conan Exiles is an open world multiplayer survival game set in the savage world of Conan the Barbarian, where players must survive, build, and dominate either in single-player or multiplayer. Conan Exiles left Early Access and released in full on PC, Xbox One, and PlayStation 4 in May of last year and quickly became the bestselling and fastest selling Funcom game to date. 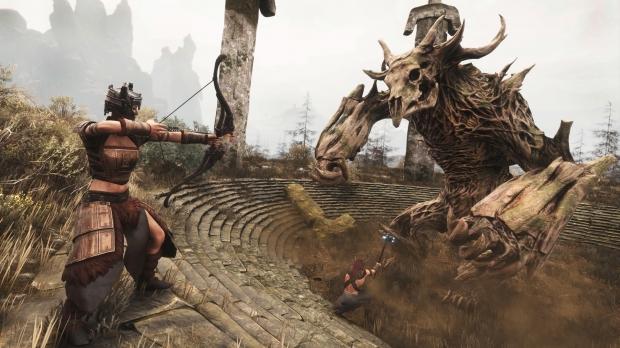 Funcom today also released a brand-new trailer for the game, showing just how far it has come since the days of Early Access. A new key art was also unveiled and is available for download below.

From Early Access through launch to where we are today, Conan Exiles has made an exceptional journey and we are incredibly proud of what it has become," said Funcom CEO Rui Casais. "With the continued support from our community we have had the opportunity to keep expanding on the game with new content, new features, and continuous improvements to technology and gameplay. We are truly excited about the opportunity to open the flood gates this weekend and allow everyone a chance to try it out."

Visit the Steam page to play Conan Exiles for free

Since releasing into Early Access in January 2017, Conan Exiles has grown in significantly in scope. Two entirely new landmasses have been added, the frozen north and the eastern jungle, and dozens of updates have been released introducing new content and features including climbing, a new combat system, farming, traps, new dungeons, and much more. Today, Conan Exiles is one of the most elaborate games in its genre and the development team continues to put out new updates and DLCs. For a full overview of updates since Early Access, check out the Updates section on the official website.

Conan Exiles is also available on Xbox One and PlayStation 4.

ABOUT FUNCOM - Funcom is an independent developer and publisher of online games for PC and consoles. Funcom has provided outstanding entertainment since 1993 and continues to expand its track-record of more than twenty released games. Titles include 'Conan Exiles', 'Secret World Legends, 'Age of Conan: Hyborian Adventures', 'The Longest Journey', 'Anarchy Online', 'The Park', and 'Dreamfall: The Longest Journey'. For corporate information please visit www.funcom.com. For information about Funcom games visit www.conanexiles.com, www.secretworldlegends.com, www.anarchy-online.com, www.dreamfall.com, www.theparkgame.com, www.conanexiles.com, or www.ageofconan.com. Funcom is listed on the Oslo Stock Exchange under the ticker FUNCOM.

ABOUT CABINET - The Cabinet group consists of Cabinet Entertainment, a tv/film financing and production company, as well as Cabinet Licensing, a consumer products division which manages and develops global entertainment franchises in all forms of media, including motion picture, television, and the gaming, publishing and toy/collectibles industries. Our portfolio consists of well-known brands such as Conan the Barbarian, Kull of Atlantis, Solomon Kane, Mutant Chronicles, Mutant: Year Zero, and Kult.