US Pre-orders Begin 1st November 2018 with Europe to follow in January 2019 After SXFI AMP Launches in Singapore with Thousands of Early Customers Blown Away and a Bevy of Rave Reviews from Major Mainstream Media and Tech Reviewers. 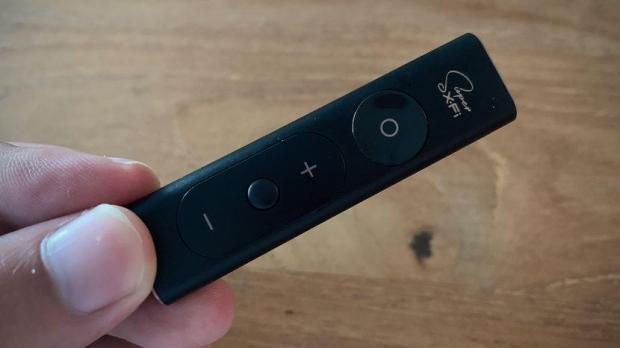 SINGAPORE - 5 November 2018 - Creative today announced that it would begin taking pre-orders for its SXFI AMP in the US beginning 1st November 2018 with Europe to follow in January 2019, after it had achieved impressive customer satisfaction figures at launch in Singapore with its Super X-Fi Headphone Holography.

The SXFI AMP is the first manifestation of the Super X-Fi technology that won multiple awards, including the Best of CES 2018 Award (AVS Forum). The SXFI AMP was snapped up in record numbers during the first few hours of its launch and has achieved a very high satisfaction number, with over 99% of customers impressed with its performance, way above industry norms.

The SXFI AMP is the best of two worlds; it combines Super X-Fi technology with a premium high-performance headphone amplifier in a dongle no larger than a finger.

"We're stoked at the response we've had since we launched Super X-Fi. Thousands of people have dropped by Creative HQ over the last few weeks to collect their SXFI AMP. We walked them through a personalization service and a series of hands-on demos. The team took this wonderful opportunity to interact personally with all of them, and has seen how they responded to Super X-Fi. We obtained the satisfaction rate from this sizable group of random customers from all walks of life. Many mentioned that they got goosebumps listening to the magic of Super X-Fi, while others were shocked that even mono music tracks were made to sound like a 'live' concert," said Darran Nathan, Business Director of Super X-Fi.

"We are proud to share that over 99% of folks who bought the SXFI AMP are very satisfied! This is way beyond my wildest dreams. Honestly, I would have been ecstatic if we had achieved anything close to 80%. For this we would like to say a big thank you to all our customers for their support. This is what the team has worked so hard for. To make your headphone experience sound as good as the real thing," said Sim Wong Hoo, CEO of Creative Technology, and creator of Super X-Fi.

"For the remaining less than 1%, I'm not giving up on winning them over. From the recent interactions in Singapore, we now understand their needs better. We believe we can scale Super X-Fi technology to suit them, while maintaining the magic."

"This is just the beginning of a very exciting journey. It's still early days yet, in a small market like Singapore. Just like the transition of black and white TV to color TV, it's my personal goal to let every headphone user on this planet enjoy the magic of Super X-Fi. Since CES 2018 Las Vegas, we have had a huge number of enquiries in the US and worldwide about its availability, and we are going to make this exciting technology available in the US now, followed by Europe in January 2019," added Sim.

Established Tech Reviewers from the mainstream press, as well as from tech blog sites were also blown away by the SXFI AMP, with many accrediting it with an 'Editor's Choice', and other top honors:

"Whether playing games, watching movies or listening to music, my audio experience went up several notches with the Amp. With each device, it delivered realistic surround sound with jaw-dropping accuracy ... The Creative Super X-Fi Amp is a glimpse into this headphone holography technology that works really well and is truly magical."

"Listening to some of Michael Jackson's hits reminded me of my youth when I closed the door to blast them out on my (pretty good) hi-fi system. Movies sounded so much better, while music videos and concert recordings practically induced goose bumps. Audio tunes came across very well too, and nothing seemed to frazzle or throw off the Super X-Fi magic."

"The Singapore company, which had made its name in digital audio all those years ago before it was a thing, calls the technology a "miracle", after all. Well, after trying it out for more than a week, I'm here to tell you that the hype is justified - mostly. The sound is truly impressive, with the potential of making modestly priced earphones come across as surprisingly open, natural and detailed in their presentation."

"The million dollar question is: Does the SXFI Amp lives up to Creative's hype? I have to say, it does. When it's turned on, the sound expands outward, like what you'd hear in a home theater setup."

- Aloysius Low, CNET, from the article: "The mind-blowing Creative SXFI Amp is here at last, Creative's magical holography tech is real -- and you can get it real soon."

"The SXFI will make you doubt your earphones, and you'll never listen to things the same way again."

Singapore TV celebrity and host, Darren Lim, also bought the SXFI AMP. He came unannounced to pick it up and gave this impromptu unrehearsed reaction after listening to Super X-Fi, "I remember watching YouTube, and I think Mr Sim, he said, this is equivalent to switching from black and white television to color television, I think he is not exaggerating ... the first time I saw it online, and I thought what??? It's just S$219? What??? Are you sure? There was a little bit of a doubt. Because if the equivalence is from black and white tv to color tv, that change is great, that change is phenomenal. So I would expect it to be a lot more, but now, it's so available to everybody, yeah anyone can afford this, and I think if you don't do it, you're depriving yourself."

You can watch the interview here:

Mark Henninger (Senior Editor AVS Forum, The World's Largest Audio Enthusiast Forum), also mentioned in the AVS forum that, "I heard game clips and it was insanely effective. INSANE." This was his reaction after listening to Super X-Fi on the finalized shipping product at CEDIA 2018, in San Diego.

You can find even more rave reviews here: www.sxfi.com/tech/.

Imagine capturing the listening experience of a high-end multi-speaker system in a theater and actually re-creating that same expansive experience - the same depth, detail, soundstage, three dimensionality, immersiveness, realism and more. It's like the magic of holography, but in audio - for headphones.

Leveraging on leading-edge precision technology that maps the distinct acoustics of an audio system projecting sound to the human ear in an expansive three-dimensional space, the Super X-Fi holographic audio technology intelligently translates that complex information into an almost identical breathtaking listening experience for headphones.

In addition, everybody hears sound differently in the real-world, depending on the shape of one's ears and structure of the head. Super X-Fi further uses Artificial Intelligence to map the individual's ear shape and head profile, then utilizes a computationally complex algorithm to transform and custom tailor the audio to each individual, so that it sounds perfect to each and every one, and like what they hear in the real-world.

The SXFI AMP is priced at USD149.99 plus shipping and handling, and will available for pre-order in the U.S. beginning of November

European users may make their reservations by visiting sxfi.com/amp-eu

Early Adopters ordering the SXFI AMP during this initial launch period will also receive a complimentary pair of Aurvana SE Super X-Fi Certified Headphones worth USD69.00 (SGD99.00) when they pre-order. This offer will be available for a limited period only, and while stocks last.