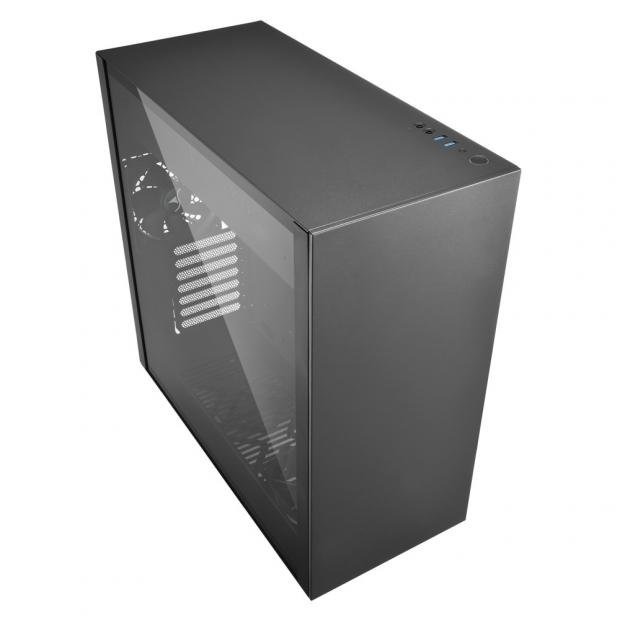 Linden, 15th October 2018 - With the PURE STEEL, Sharkoon Technologies introduces an ATX midi tower which puts individual creativity into the foreground. The spacious case catches the eye with its minimalist steel body and almost frameless side panel made of tempered glass. In combination with a power supply tunnel which is situated in the top of the case, the side panel should provide an optimal view of the individualized hardware configuration - including the illuminated fan of the power supply. The blank and inconspicuous front panel can thus become the actual side panel. The case would therefore be appropriate as a hardware showroom to be placed on the table top. Those wishing to put a special frame around their hardware can do so using the steel chassis - with its black or white foundation - as a blank canvass for various modding ideas.

For a worthwhile display of the hardware, the PURE STEEL should also be able to incorporate demanding components such as mainboards with dual or multi-processors, CPU coolers with a maximum height of 16 cm as well as graphic cards with a maximum length of 42 cm. A rubberized support is also pre-installed which prevents any sagging of the graphics card.

The PURE STEEL has a pre-installed 120 mm fan at the back and another on the bottom panel. If the HDD/SSD mounting cover is removed from the side panel, up to six 120 mm fans can be installed. The case has extra-long slots for water cooling compatibility. The bottom of the case has sufficient space for a 360 mm radiator.

The PURE STEEL is also available as an RGB version with a black chassis. This version comes with a total of four pre-installed RGB fans all with addressable LEDs. Three fans are situated on the bottom panel and one at the back. The case has a controller for the RGB fans, and this can be used as a hub, connecting compatible mainboards with up to eight addressable RGB components. The illumination is then controlled via the mainboard software. Alternatively, for mainboards without a connection for addressable RGB, the LED components can be manually controlled using the reset switch on top of the case to select fourteen pre-set lighting effects.