A new milestone in transportation was reached today as NAVYA and Keolis, in partnership with the city of Las Vegas, launched the first completely autonomous, fully electric shuttle ever to be deployed on a public roadway in the United States. The shuttle is being launched in the new Innovation District that was recently created by the city of Las Vegas in downtown Las Vegas.

Las Vegas Mayor Carolyn G. Goodman and other local officials were at today's ceremony marking the debut of NAVYA's ARMA vehicle on an American public street in downtown Las Vegas' Fremont East Entertainment District. During the week-long pilot, the public will be invited to take free test rides of the driverless vehicle, which carries up to a dozen passengers and was designed for use by state and local governments and transit agencies and operators as an efficient, clean-energy alternative to the fossil-fuel powered vehicles of today.

The pilot was made possible through a partnership between Keolis, a global leader in operating public transportation systems, and NAVYA, which developed the ARMA Shuttle. The public will be able to ride on the shuttle Jan. 11-20, as it travels along east Fremont Street between Las Vegas Boulevard and Eighth Street, with regular street traffic.

The city of Las Vegas recently established an Innovation District in downtown Las Vegas to create a center for testing groundbreaking technology in the areas of alternative energy, citizen participation, transportation and social infrastructure.

The city plans to transform the downtown urban core into a technology incubator focused on safe, efficient, sustainable and environmentally conscious mobility including autonomous and connected vehicles and establishing a platform for deploying innovation. 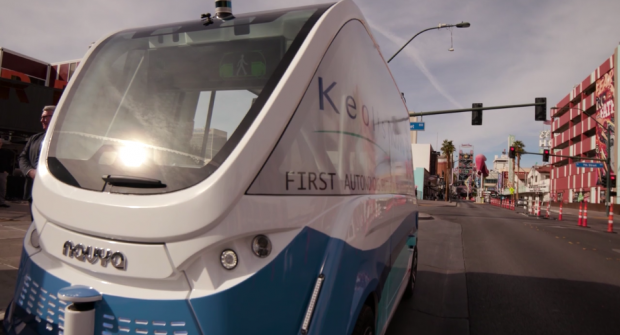 "The city of Las Vegas is on the cutting edge of technology and innovation, building on the strong tech foundation provided by SWITCH and Nellis Air Force Base," Mayor Goodman said. "The city of Las Vegas is making major investments to improve motorist mobility and safety, provide reliable transportation choices and showcase technology in downtown Las Vegas, and we are thrilled Keolis is taking us a step in that direction."

"NAVYA is delighted to be part of the innovative, new model of urban transportation solutions Mayor Goodman and our transportation partners at Keolis are bringing to the city of Las Vegas. Busy areas such as the Fremont East Entertainment District of downtown Las Vegas are the perfect place for the ARMA as it allows people to move easily and safely while reducing car congestion and pollution," said NAVYA VP Henri Coron.

"This pilot marks an important milestone in bringing us closer to our shared vision of delivering public mobility solutions that are both connected and sustainable. We are pleased to be showcasing this exciting new technology here in Las Vegas with our partners at the Regional Transportation Commission of Southern Nevada (RTCSN), as we work together to deliver energy efficient, sustainable transit solutions that will improve the quality of life for people in Nevada and around the world," said Clement Michel, CEO of Keolis North America, operator of the RTC's transit system along the Las Vegas Strip and the southern part of the Las Vegas valley.

NAVYA began testing ARMA for service in North America at MCity, the University of Michigan's unique test site for connected and automated vehicles in December 2016, showcasing the vehicle publicly in the United States for the first time at the 2017 Consumer Electronics Show this past weekend in Las Vegas.

Since first deploying the NAVYA ARMA in France in late 2015, the vehicles have transported more than 100,000 people and have grown to have a fleet of 30 ARMA's in use in seven countries around the world, including the United States, as of today.

NAVYA, created in 2014, is a French company specializing the development of innovative, smart and sustainable mobility solutions. NAVYA develops driverless, automated electric vehicles that are dedicated to first and last mile and independent of all infrastructure. In October 2015, NAVYA launched the NAVYA ARMA, a 100% autonomous, driverless and electric shuttle which is now operating globally on a variety of private sites and public roads. For more information, visit www.navya.tech.

For more than a century Keolis has been a global leader in managing passenger transportation systems throughout the world, transporting 3 billion passengers a year via trains, buses, shuttles and taxis, while providing fleet management and maintenance, parking facility management, logistics and routing services. Learn more about how Keolis and our 60,000 employees are always "Thinking Like A Passenger" at www.keolisnorthamerica.com.