Today at its fan-focused event, AMD (NASDAQ: AMD) unveiled new information and gave enthusiasts hands-on time with its upcoming high-performance desktop processors based on the innovative "Zen" core architecture (codenamed "Summit Ridge") in advance of the official launch in Q1 2017. 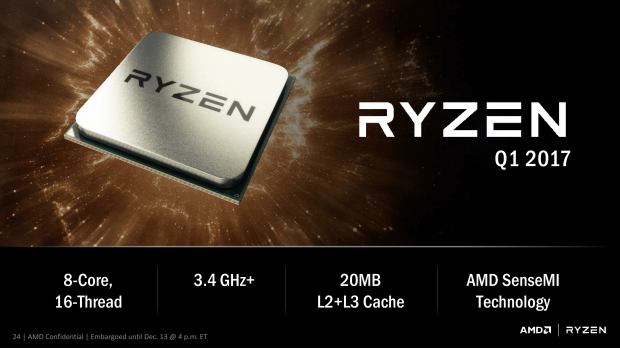 Drawing inspiration from the core's name and AMD's desire to push high-performance CPUs to a new horizon, AMD introduced Ryzen, the brand which will span across "Zen"-based desktop and notebook processor families. Additionally, AMD introduced SenseMI, a set of sensing, adapting, and learning technologies built into the AMD Ryzen processor that combine with multiple other advances in architectural, platform, efficiency, and processing technology to address the demanding needs of gamers and enthusiast PC users.

"The 'Zen' core at the heart of our Ryzen processors is the result of focused execution and thousands of engineering hours designing and delivering a next-level experience for high-end PC and workstation users," said AMD President and CEO Dr. Lisa Su. "Ryzen processors with SenseMI technology represent the bold and determined spirit of innovation that drives everything we do at AMD."

AMD SenseMI technology is a key enabler of AMD's landmark increase of greater than 40 percent in instructions per clock1, and is comprised of five components:

Jim Anderson, senior vice president and general manager, Computing and Graphics Group, AMD, commented: "The desktop market is hungry for change as new and demanding use cases like VR, 3D modeling, and eSports require intense amounts of processing and graphics power. We designed Ryzen processors to excel in these areas and to bring much-needed innovation and competition back to desktop PCs."

AMD Ryzen processors for desktops are expected to be available beginning in Q1 2017 and AMD Ryzen notebook processors are planned to launch in 2H 2017.