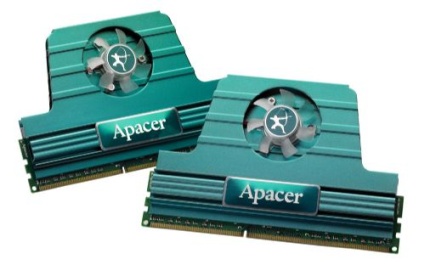 What stands out most about these particular modules is the heatsink design. Unlike anything seen in the memory market before, these modules use an active heatspreader with an in-built low noise fan that helps in the heat dissipation process. Apacer claim that by using this heatsink/fan design, temperatures are reduced by up to 20c. We've seen standalone active cooling solutions for memory modules before, but nothing built-in to the heatspreaders themselves; a rather interesting concept.

Getting back to the modules themselves, both speed variants come in 2x1GB Dual Channel kits with support for Intel's XMP. Timings are quite respectable for DDR3 memory at 7-7-7-20.

Besides providing ultra-high speed and ultra-low latency, the Apacer Aeolus memory modules also use a unique, patented active heat spreader design that makes it possible to reduce the temperature by as much as 20C. This highly effective solution to the problem of heat dissipation for DDR3 overclocking memory modules improves both overclocking performance and memory stability.

Apacer's new DDR3-1800MHz/1600MHz memory module provides 2GB of memory capacity in a dual-channel (1GB2) package, and supports Intel's latest XMP (Extreme Memory Profiles). When used with a motherboard that supports Intel XMP, the chipset will automatically read the memory module's SPD (Serial Presence Detect) and will then automatically perform overclocking, enabling the user to experience all the excitement and power that overclocking has to offer.