Intel will have a bunch of new 13th Gen Core "Raptor Lake" mobile processors to show off at CES 2023 in just a few weeks' time, with the new 14-core CPU in the form of the Core i7-1370P mobile CPU teased.

The new Intel Core i7-1370P processor will reportedly feature 14 cores and 20 threads of Raptor Lake CPU power at up to 5.0GHz, which is going to be pretty sweet to see inside of a new gaming laptop. We've already heard about Intel's upcoming H, HK, and HX series CPUs based on Raptor Lake, but now we're hearing more details on the Core i7-1370P mobile processor. 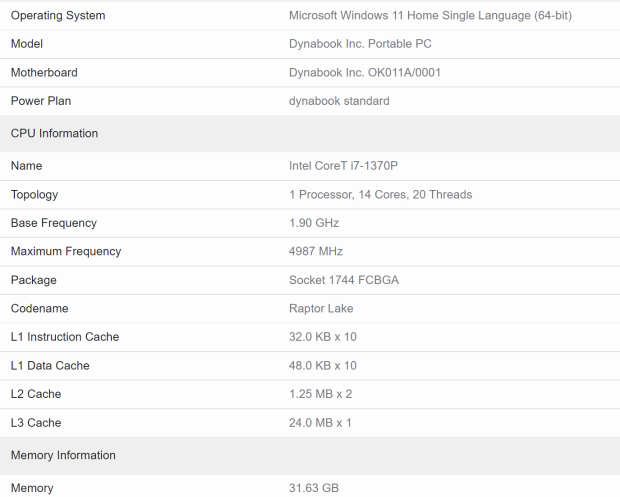 Intel is reportedly going to have its low-power P-series with a default TDP of 28W, which will see the Core i7-1370P processor -- and other P-series CPUs -- destined for next-gen ultra-thin laptops, as well as high-end tablets that will debut in 2023.

Here we can see the Geekbench benchmark results of Intel's upcoming Core i7-1370P processor, with a single-core score of 1655 and a multi-core score of 10184. We should expect many more details on Intel's new 13th Gen Core P-series CPUs at CES 2023, which is just right around the corner.