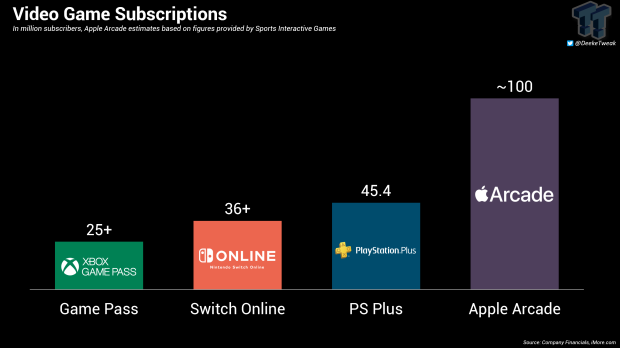 According to figures provided by Football Manager developer Sports Interactive Games, the subscriber numbers behind Apple Arcade dwarf other competing services. SIG's Miles Jaconbson tells website iMore that Apple Arcade could have at least 100 million subscribers: "I'm told nine-figure subscribers, I have no idea if those numbers are right or not."

If accurate, then Apple Arcade is far and away the leader in the video game subscription space. Some critical context is needed here though: Apple Arcade is available on a wide variety of iOS products, all of which have a much larger installed base than the PlayStation 4/5, Xbox One/Series X/S, and Nintendo Switch.

It's also worth remembering that Switch Online and PlayStation Plus are both locked to consoles for dedicated play, whereas Xbox Game Pass does offer native PC gaming play.

Even still, these numbers are impressive if they are accurate. Now we can see why Microsoft is so dead set on expanding Game Pass onto mobile in a more meaningful level--Microsoft has said that it wants to use the Activision-Blizzard merger as a big expansion point to power its mobile ambitions, including helping add value to its own mobile games storefront.