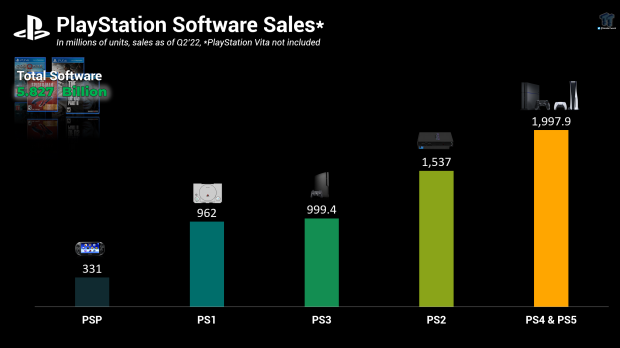 Sony's latest Q2 earnings report refreshes all of PlayStation's key metrics including revenues, hardware shipments, and software. Today we'll be taking a closer look at software shipments across both physical and digital channels.

According to data published by Sony and compiled by us, total PlayStation software units have reached 5.827 billion across all video game hardware generations from the PSP to the PlayStation 5. Oddly enough, Sony does not publish PlayStation Vita software sales, so this figure is actually higher.

The PlayStation 4 and PlayStation 5 console generations make up the largest proportion of game sales with 1.997 billion games sold, most of which is from the PS4. These numbers will break 2 billion on the heavy influx of game sales during the Q3 2022 holiday period. 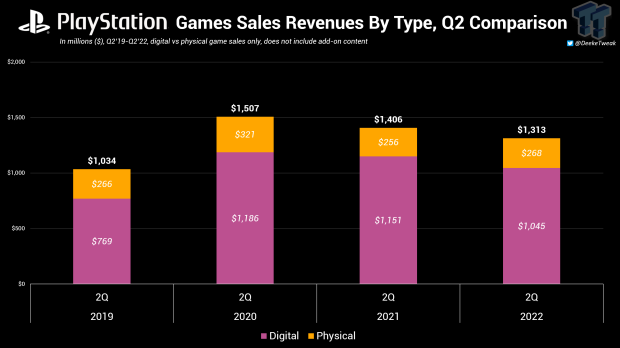 As for the Q2 performance of game unit sales and revenues, total game earnings were down slightly year-over-year to $1.313 billion. Physical game sales revenues were actually up to $268 million, whereas digital earnings were down to $1.045 billion. 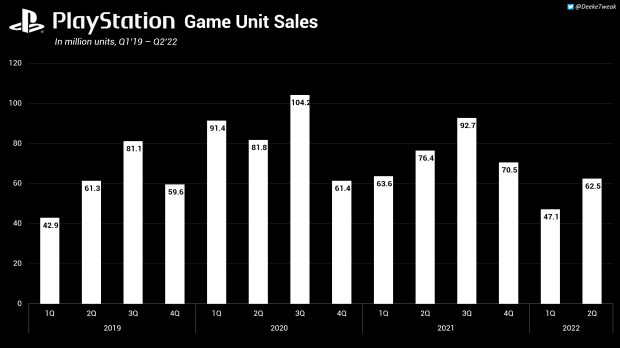 Game unit sales were likewise down in Q2. From July to September 2022, Sony sold 62.5 million games across digital and physical distribution channels. This represents an 18% decline in game sales volume and nearly 14 million less units sold from the year-ago Q2 2021 period. 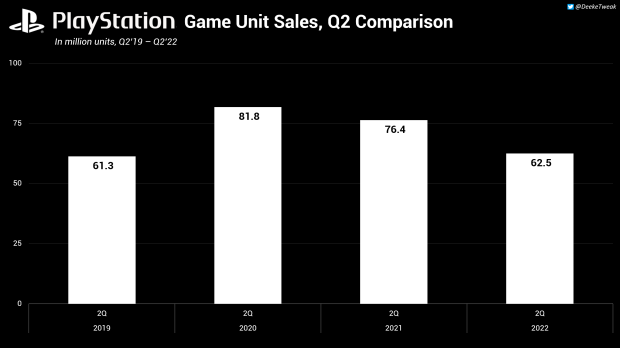 Sony management has acknowledged lower first-party and third-party game sales for Q2, but remains confident heavy-hitters like Modern Warfare 2 and God of War Ragnarok will help stabilize earnings throughout the holidays.

"Production has been going quite well. According to the previous period, we have a decline in MAUs as more people are now going outdoors. PS4 and third-party sales have been rather sluggish, and catalog titles and historical titles have been declining," Sony Chief Financial Officer Hiroki Totoki said in a recent Sony Q2 earnings briefing.

"PS5 engagement is quite high, so in Q3 we expect some recovery. We have strong first-party titles and we have some seasonal effect on Q3 that we can see some of the recovery coming from the downturn.

"There has been a weakness in third-party software because our initial forecast was too strong and therefore we have to reflect. Users are going out from home and therefore have impacted our sales.

"Large third-party AAA titles will allow us to maintain our strength, for example Call of Duty had a good release, and for the third quarter we do have very high expectations."