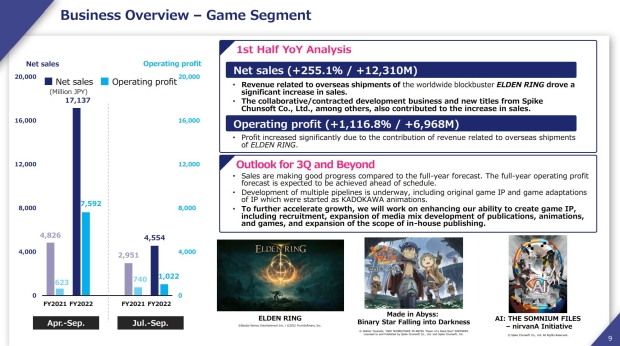 With over 16 million units sold across all platforms, Elden Ring is an outstanding smash-hit sensation that could end up being the best-selling game of 2022. The game's incredible performance has helped spike both sales and operating profit of FromSoftware's owner, the Kadokawa Group.

Remember that Elden Ring is published by Bandai Namco and we will likely hear more information and updates when Namco posts their earnings soon. Bandai Namco had previously confirmed that Elden Ring is now an official franchise and that more content is on the way, including a possible sequel or maybe expansion into film/TV format.

Sony and Tencent also invested into FromSoftware by purchasing 30% of the developer's shares in order to help fund new game development projects.

The Game Business includes planning, development, sales and licensing of game software and internet games. Revenue from the overseas shipment and so forth of a video game, Elden Ring, which is a record hit, contributed significantly to revenue and profit growth. The collaborative/contracted development business and new games of Spike Chunsoft Co., Ltd. also contributed to revenue growth.