NASA's Mars rover is currently collecting samples across the Red Planet and placing them in sample tubes that will eventually be transported back to Earth.

NASA's Perseverance rover has been collecting samples of the Red Planet for many months, and now the space agency, along with the European Space Agency (ESA), has agreed upon a location for the first sample drop-off site. In a new blog post on the NASA website, the space agency explains that Perseverance will soon be entering a new phase of its mission which will be transporting the samples it has onboard to Three Forks, a location at the base of an ancient river delta in the Jezero Crater.

Notably, Perseverance has been collecting samples in pairs which ties into NASA's plan of having Perseverance deliver its samples to a rocket that will blast off from the Red Planet back to Earth. However, to give the mission its best chance of success, one of the duplicated samples will be dropped off at the first Mars sample depot at Three Forks. By doing this, Perseverance clears room for more samples to be collected, and the already collected samples are put away for safekeeping. 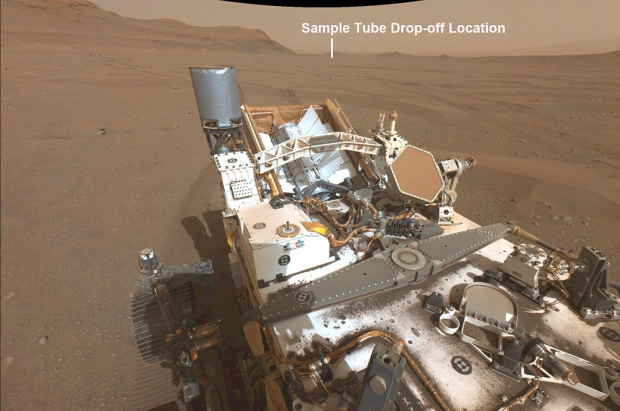 NASA and the European Space Agency are prioritizing success for the Mars sample return mission as the samples that Perseverance has collected are already showing promising signs of organic matter, which may lead to the possibility of life being confirmed on another planet. However, further analysis by more advanced instruments back on Earth is needed to verify their significance.

As explained by Thomas Zurbuchen, NASA associate administrator for science, once Perseverance has successfully dropped off the duplicated samples, it will be a historic moment for science on Mars as it will mark the very first sample depot on the Red Planet.

"Never before has a scientifically curated collection of samples from another planet been collected and placed for return to Earth. NASA and ESA have reviewed the proposed site and the Mars samples that will be deployed for this cache as soon as next month. When that first tube is positioned on the surface, it will be a historic moment in space exploration," said Thomas Zurbuchen, associate administrator for science at NASA Headquarters in Washington.

David Parker, ESA director of Human and Robotic Exploration, explained that selecting a viable location for a sample depot and Perseverance in dropping off its samples in that location can be considered a "major de-risking step for the Mars Sample Return Campaign."

For those that don't know, Perseverance landed in the Jezero Crater on February 18, 2021, and since then, NASA's newest Mars rover has explored more than 8.2 miles of the Martian surface and collected 14 rock-core samples.