Bethesda's Todd Howard reveals that Fallout New Vegas was originally supposed to be an expansion to Fallout 3, but Howard very much wanted it to be its own game.

The Fallout franchise turns 25 this year, and Bethesda is rolling out a series of retrospective videos to celebrate the series. One of these videos discusses Fallout New Vegas and how Obsidian's beloved RPG actually started off as a major game expansion to Fallout 3.

Years after Oblivion's success, Bethesda hit it big with Fallout 3, and the studio was eager to keep that momentum going. That's what led to Fallout New Vegas.

"We were like, Fallout 3...this is successful now, let's not let the chance pass by. We should do a big expansion pack with other companies that could do it. We knew the folks at Obsidian--there was only really one group that we would really want to do this. It actually started as a big expansion pack for Fallout 3," Todd Howard said in a recent Fallout retrospective video.

Howard, Bethesda's creative star, pushed for New Vegas to be an actual game.

"I felt really strongly that it should be its own game."

Bethesda couldn't help Obsidian make New Vegas. The team was too busy with Skyrim, which would release just 3 years later and become one of the best-selling RPGs in history. Bethesda passed the baton down to Obsidian, giving them "everything" they had on Fallout 3.

"We said 'We're heads down in Skyrim, we don't really have the resources to help you. We're going to give you everything.' We gave them the entire engine for Fallout 3, we gave them the whole game, all the assets--everything," said Bethesda Game Studios managing director Ashley Cheng.

"I have a lot of respect for the work they did on that game. That was really hard to do, to take someone else's engine and technology and tools and build something fantastic with it." 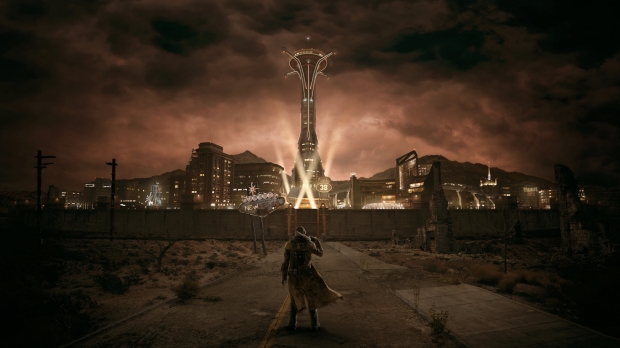 New Vegas game director Josh Sawyer, who had played Fallout extensively in his early years, was excited for the task.

"We knew we weren't going to deviate tremendously from what Bethesda did. Let's look at what we can bring to it that feels unique from our perspective without trying to reinvent the wheel," said game director Josh Sawyer.

These unique features included a survival mode, more direct references to the characters and factions from the original games complete with branching narratives.

So what's next for Fallout?

Bethesda says Fallout 5 is next after Elder Scrolls VI, but we're going to be a waiting a long time. Meanwhile, Obsidian says they'd love to work on another Fallout game...