1990s PlayStation classic Parasite Eve may be the next Square Enix game to make a comeback. 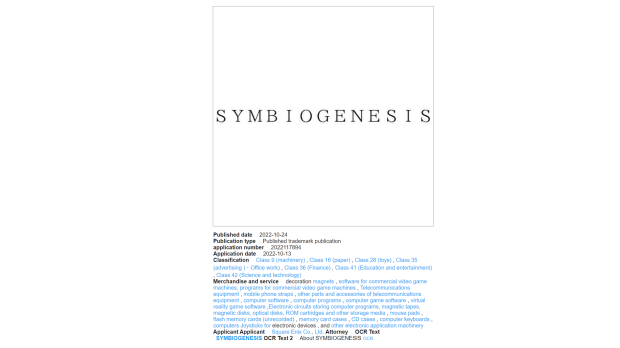 Square Enix just filed a new trademark for Symbiogenesis in Japan, which could indicate a revival of its Parasite Eve franchise, or at least a spiritual successor. The term itself is defined as the "merging of two separate organisms to form a new single organism" which directly relates to the bio-horror game's central plot.

Originally published in 1998, Parasite Eve saw three releases across multiple PlayStation consoles (the first two games launched on PS1, and the Third Birthday launched on PS3). Interestingly enough, Square Enix may not be able to use the actual Parasite Eve name for this new project even if it is related to the original series.

According to Dusk Golem, a Twitter user with knowledge of the going-ons in horror gaming, Square Enix does not actually own the Parasite Eve franchise. It turns out that Parasite Eve was originally a Japanese sci-fiction horror book published by Kadokawa back in 1995. The IP was licensed out to Square Enix in the late 90s who used the name to design their own video game adaptation.

It's expected that Symbiogenesis is a way for Square Enix to get around not owning the IP rights to the Parasite Eve name. It's also possible that Aya Brea could return in some fashion.

This trademark underlines the industry's pivot to classic horror franchises. A number of high-profile franchise are getting the reboot, remaster, and re-release treatment, including Capcom's original Resident Evil trilogy and an upcoming remake of Resident Evil 4, the return of Dead Space, the newly announced Silent Hill 2 remake, and a new Alone in the Dark reboot from THQ Nordic.