NASA has taken to its Sun & Space social media account to announce that the Sun has erupted eight solar flares and twenty-three solar flares.

NASA has posted to its Sun & Space Twitter account to announce a space weather roundup for the past week. According to the announcement, the Sun has released a total of eight solar flares and twenty-three coronal magnetic ejections over the course of the week. Above is a NASA video that showcases various active regions on the Sun that can be seen in the brighter areas of our star. Notably, there were no geomagnetic storms to report despite the Sun's increasing activity.

The space agency explains that at 2:30 in the video, you can see NASA's Solar Dynamics Observatory (SDO) make calibration maneuvers, which is an important process that only happens twice a year. The calibration maneuvers ensure the spacecraft's instruments are taking in the light from the Sun accurately, while also assessing how that light is being received by the spacecraft.

For those wondering what a coronal mass ejection (CME) or a solar flare are, a coronal mass ejection is a large cloud of energized and magnetized particles launched from the corona of the Sun into space. These Sun blasts typically but do not always follow a solar flare, which is a brief but extremely intense eruption of high-energy radiation from the surface of the Sun.

These solar flares are closely associated with sunspots and, much like CMEs, can impact Earth, causing radio and magnetic disturbances. In this instance of solar activity, none of the CMEs or solar flares seem to have been Earth-facing, meaning that there was little to no impact on Earth's magnetosphere. 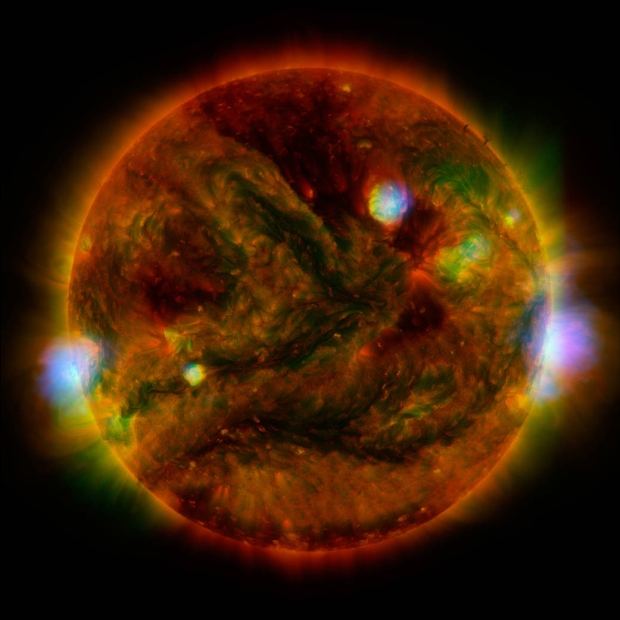 In other Sun news, NASA recently took to its social channels to share a mosaic image of the Sun that was created using multiple images from three different spacecraft. The image was captured on April 29, 2015, by the Nuclear Spectroscopic Telescope Array (NuSTAR), Hinode, and NASA's Solar Dynamics Observatory. The blue regions of the image are active flaring regions of the Sun, the green regions are low-energy X-rays, and the yellow/red regions are extreme ultraviolet light. For more information on this image, check out this link here.