The Sun is much larger than people may expect and constantly affects Earth with blasts of charged particles streaming from its surface in various forms.

Our local star has a diameter of 864,000 miles, which may be hard to visualize, but being the largest object in our solar system, that isn't surprising. Notably, approximately 1.3 million Earths can fit inside the Sun, and due to its immense size and power, its presence directly affects Earth. An example of how the Sun can affect us is seen above in an incredible video captured by Miguel Claro, who writes on Space.com that on July 10, 2022, the Sun released a gigantic solar prominence that resulted in a coronal mass ejection (CME) being launched into space.

Claro explains in his article that as soon as he realized that a solar prominence was visible, he began taking photos, with the astrophotographer snapping pics of our star from 5:37 p.m. and 6:30 p.m. local time (Alqueva, Portugal). The final results are absolutely stunning, and as Claro explains, the short video is comprised of approximately one-hour images that shows the prominence swirling like a tornado over time. Plasma releases such as the one seen in the above video, when directed at Earth, can result in charged solar particles impacting Earth's magnetic field. 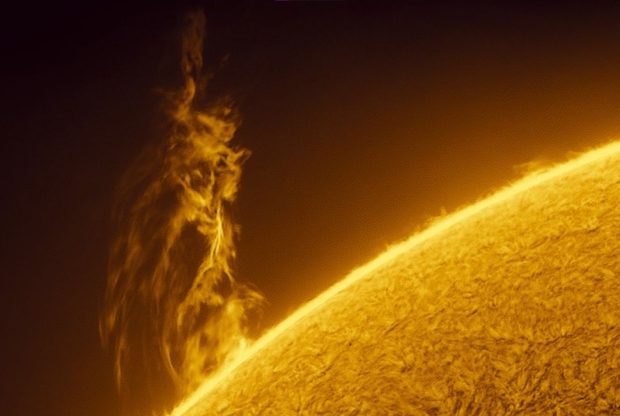 Coronal mass ejections from the Sun can pose a danger to spacecrafts and astronauts aboard the International Space Station (ISS). Depending on their power, they can also impact radio communications, electric power grids, and GPS satellites.

Read more on the impact of CMEs below.