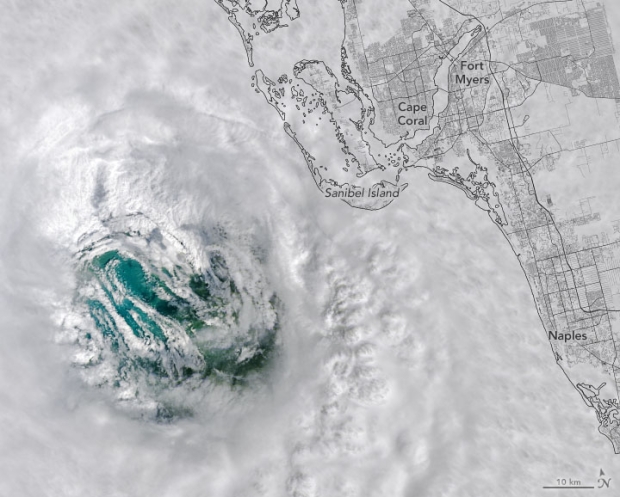 The Landsat 8 satellite used its Operational Land Imager to capture the above photograph of Hurricane Ian's eye on September 28, approximately three hours before it made landfall on the coast of Caya Costa, Florida. NASA explains on its Earth Observatory website that the eye of Hurricane Ian is the fair weather seen at the center of the storm and that the eye is surrounded by what researchers call the "eyewall", which is the part of the hurricane that has the strongest winds.

According to the report, the swirling clouds seen on the edges of the eyewall are called mesovortices, which are only found in hurricanes that have particularly strong winds. When Hurricane Ian made landfall in Florida, the National Hurricane Center reported sustained wind speeds of 150 miles per hour, which is strong enough to tear roofs off houses, collapse power lines, and cause widespread damage to almost anything in its path.

NASA researchers are now attempting to find out what made Hurricane Ian so powerful, and images such as the one taken by Landsat 8 may provide insightful clues that will enable researchers to predict a hurricane's intensity more accurately.

As explained by NASA, the above gif shows the progression of Hurricane Ian's wind intensity from September 25 to September 29, with the strongest wind speeds being represented by the color yellow and the weaker wind speeds being represented by orange and purple. When Ian traveled past Cuba, the eyewall stretched about 12 miles across, and as the storm pushed its way northeast, NASA satellites observed a second larger eye forming around the original eye, eventually enveloping it.

"An eyewall replacement cycle occurs when a hurricane develops concentric eyewalls and the inner eyewall collapses. As a result, a hurricane's eye grows much larger, and these cycles are often associated with a temporary pause in intensification. There is still much we do not understand about these cycles, and it remains an active topic of research in the tropical community," explained Charles Helms, an atmospheric scientist at NASA's Goddard Space Flight Center.