Over the weekend, NASA scrubbed its second launch attempt for the Space Launch System (SLS) rocket that was slated to liftoff from the surface of Earth on September 3.

NASA took to its blog and social channels to give a detailed update on the condition of the rocket and the reason why the launch was unfortunately scrubbed. Writing on NASA's blog, the space agency explained that officials detected a liquid hydrogen leak that was traced back to a fuel feed line between the SLS rocket and the stored liquid hydrogen. Engineers tried three separate times to reseal the fuel feed line, but all attempts were unsuccessful.

The space agency explains that since the second launch attempt was scrubbed, it will need to roll the SLS rocket and Orion spacecraft back to the VAB before another launch attempt as the system's batteries require a reset. NASA's Associate Administrator for Exploration Systems Development, Jim Free, explained via a teleconference that the space agency doesn't go into launches such as the Artemis 1 "lightly" and that a launch doesn't happen if the agency isn't sure it's going to work. 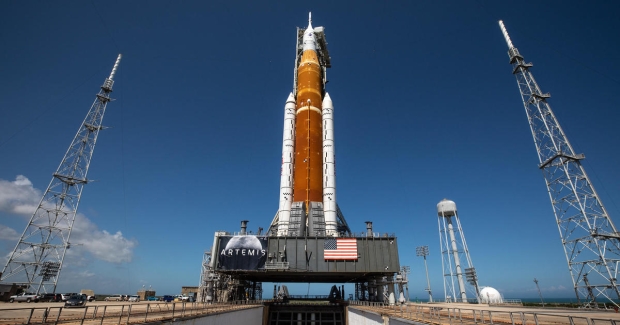 Free also explained that NASA officials are currently conducting a fault tree analysis that, when finished, will explain why a leak of this magnitude occurred. NASA scrubbed its first launch attempt because of a fuel leak, but according to Free, the leak that caused the postponing of the second launch attempt is different. Free explained that during the chill down process, there was an inadvertent pressurization event on the hydrogen transfer line that presented itself when NASA changed from slow fill to fast fill.

Notably, the rocket itself, along with all of the hardware, hasn't been damaged, despite NASA's operations team deeming the leak "large". As for repairs, engineers will assess the damaged area and determine if the SLS can be repaired at the launch pad or will need to be rolled back to the workshop. NASA has canceled any launch attempts in early September and is now targeting new launch dates in October.

If you are interested in reading more about Artemis 1 or NASA, check out the below stories for more relevant information about the space agency's future missions.