Elon Musk is the world's richest man, swinging his BD energy around tweeting that he's now going to buy Manchester United, which has sent the football world into an absolute frenzy.

In a new tweet, the SpaceX and Tesla founder and CEO said: "to be clear, I support the left half of the Republican Party and the right half of the Democratic Party!" He followed the tweet up, adding: "Also, I'm buying Manchester United ur welcome".

Manchester United is owned by the American Glazer family, who also own NFL franchise the Tampa Bay Buccaneers. The Glazers have refused multiple offers to sell Manchester United, but after the club being in serious trouble right now after finishing 6th in the last season of the Premier League era -- Musk could scoop them up if Musk chucked a couple of billion dollars at their feet.

Manchester United was taken private in 2005 after American businessman Malcolm Glazer purchased the football club which was valued at almost £800 million ($968 million USD in today's dollars) with £500 million of borrowed money becoming the club's debt. 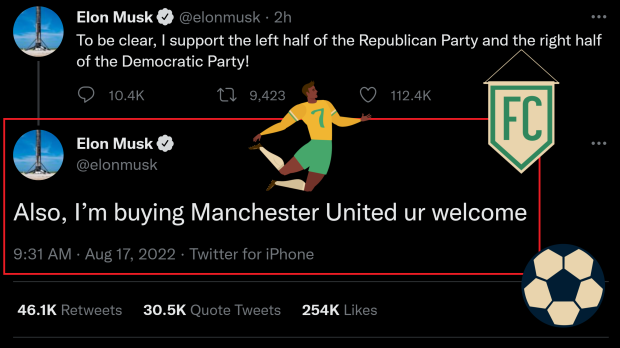 7 years later in 2012, some shares of Manchester United were listed on the New York Stock Exchange (NYSE) but the Glazer family retains overall ownership and control of the football club. This is the position Elon Musk can come in with, offering the Glazer family enough money to hand him Man Utd and walk away.