Electric vehicle owners have drawn a line in the sand online after a video posted to Twitter last week sparked outrage.

The video posted by Taylor Ogan shows a Tesla Model Y put alongside a Lexus RX SUV, both cars speed off from the start line and are driving directly at a mannequin child placed further down the road. The test was to see which vehicle's safety features were better, and from the results seen in the above video, its pretty safe to say the Tesla won. This is where the outrage began as Tesla fans rushed to find holes in the testing method, with some fans even going as far as to put a live child in front of a moving Tesla.

Whole Mars Blog conducted this very experiment with Tad Park, the CEO of EV investment company Volt Equity, and his children. First, the Tesla fans performed the same test as seen in the viral video, which was originally inspired by a demo conducted by Dan O'Dowd, the CEO of automated driving system company Green Hills Software, and what they found was that the vehicle was more than capable of detecting the mannequins at various distances and speeds.

To really put the Tesla Vision to the test, Park instructed his kids to walk out and stand in the middle of the road while he let Tesla's self-driving navigate its way through the road. When there was no safe path around the child, the vehicle proceeded to stop, even to the point where you can't manually accelerate. The very same happened when the children ran across the road in front of the car.

Whole Mars Blog conducted these tests to try to prove the illegitimacy of Dan O'Dowd's original demo that showcased a Tesla crashing through a mannequin, with the Tesla fans claiming that O'Dowd created the demo to profit his own business, which they claim is a direct competitor to Tesla. Whole Mars Blog spoke to Teslarati, where they stated that Tesla's Full Self-Driving Beta has no issues detecting children and that this is "driver assistance" and "not expected to be perfect".

"Our tests showed that Tesla Full Self-Driving Beta has no problem detecting pedestrians of all ages. As long as the driver is paying attention, which the system ensures, there is no risk to pedestrians even in the event that the software fails to detect them. This is driver assistance and is not expected to be perfect. It sickens me that Dan O'Dowd would push harmful misinformation to benefit himself financially," said Whole Mars Blog.

For more interesting stories check out the below links. 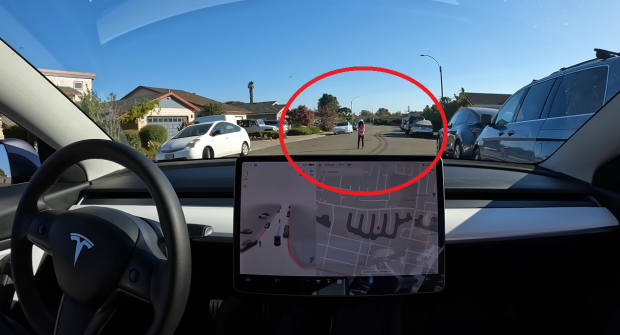