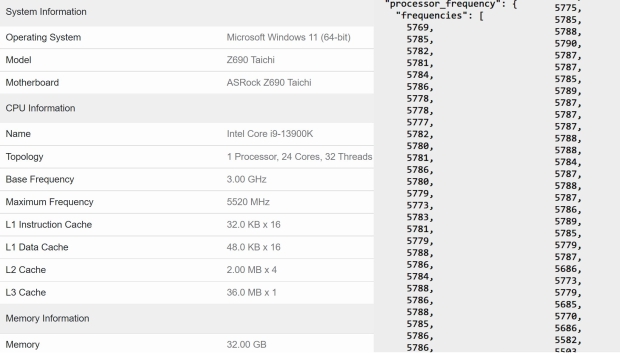 The Core i9-13900K has a maximum frequency of 5520MHz according to the Geekbench results, but the CPU actually boosted up to 5790MHz at its peak, while sitting at around 5.7GHz for the most part. We don't know if this is automatic or manual overclocking, but we should see close to and over 6.0GHz with high-end AIO coolers and 6.0GHz+ under exotic cooling setups: think custom loop, LN2 cooling, and some much higher power numbers.

In other tests, we've seen the new Raptor Lake-based Core i9-13900K using 420W+ when overclocked, so if you're using a next-gen GPU from NVIDIA with their next-gen Ada Lovelace GPU-powered GeForce RTX 4090 or GeForce RTX 4090 Ti graphics card, you will need 1000W+ between the CPU and GPU at this rate.