CERN's Large Hadron Collider (LHC) is back up and running after a three year hiatus, operating at its highest power yet. 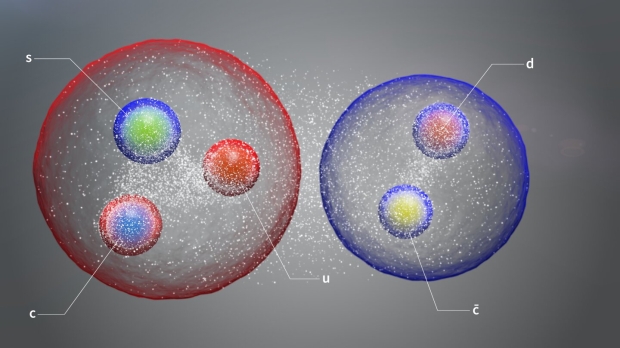 Now, the LHCb experiment at the LHC has observed three never-before-seen particles: a new type of pentaquark, and two new tetraquarks. Quarks are elementary particles that combine to make hadrons, the most common of which are protons and neutrons, found inside the nucleus of atoms. Six different kinds of quarks exist, the up, down, charm, strange, top, and bottom quarks, and the LHC has been able to observe new combinations of them in four (tetra-) and five (penta-) arrangements.

Protons and neutrons are made from a combination of three up and down quarks, however, exotic hadrons like the newly discovered tetraquarks and pentaquarks contain less common quarks. The new pentaquark contains a charm quark, a charm antiquark (the antimatter equivalent of a charm quark), an up, a down, and a strange quark, making it the first pentaquark observed to be made with a strange quark. 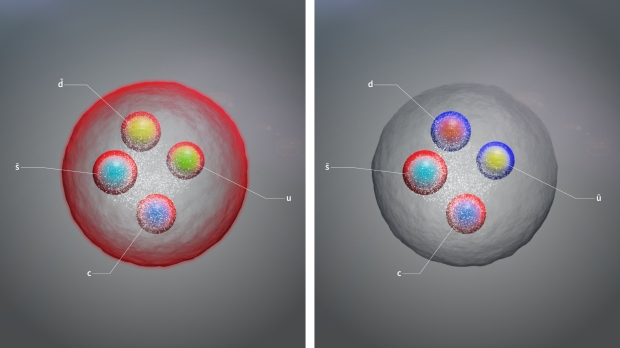 The tetraquarks were observed as a pair, another first-time occurrence. The first tetraquark comprised a charm quark, strange antiquark, up quark, and down antiquark. The tetraquark carried a double electric charge, and the second tetraquark was its electrically neutral counterpart.

"The more analyses we perform, the more kinds of exotic hadrons we find. We're witnessing a period of discovery similar to the 1950s, when a 'particle zoo' of hadrons started being discovered and ultimately led to the quark model of conventional hadrons in the 1960s. We're creating 'particle zoo 2.0,'" said LHCb physics coordinator Niels Tuning.

"Finding new kinds of tetraquarks and pentaquarks and measuring their properties will help theorists develop a unified model of exotic hadrons, the exact nature of which is largely unknown. It will also help to better understand conventional hadrons," said LHCb spokesperson Chris Parkes.

You can read more from CERN's press release here.