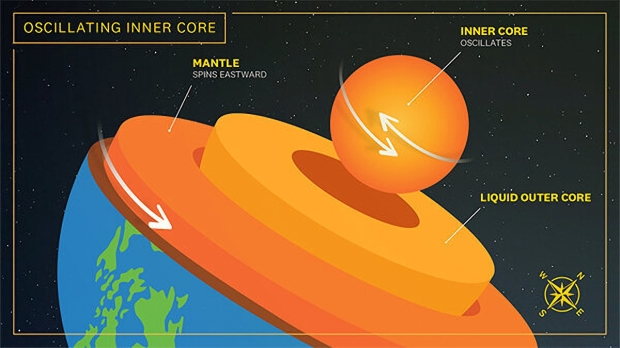 Researchers from the University of Southern California (USC) have found evidence of the Earth's inner core oscillating instead of consistently rotating faster than the planet's surface does, as was previously thought. Seismic data from 1969 to 1974 indicates that the direction of the inner core's movement changed during that time. The scientists believe the inner core movement explains the changes in day length seen in the last several decades.

"From our findings, we can see the Earth's surface shifts compared to its inner core, as people have asserted for 20 years. However, our latest observations show that the inner core spun slightly slower from 1969-71 and then moved the other direction from 1971-74. We also note that the length of day grew and shrank as would be predicted," said John E. Vidale, co-author of the study and Dean's Professor of Earth Sciences at USC Dornsife College of Letters, Arts and Sciences.

The researchers confirmed that inner core rotates faster than the planet's surface, known as super-rotation. Previously thought to super-rotate about 1 degree per year, they found the rate was closer to 0.1 degrees per year using data from the Large Aperture Seismic Array (LASA).

Analyzing seismic data generated by underground nuclear bomb tests from 1969 to 1974 also showed the core had reversed direction, supporting the idea that changes in day length of about 0.2 seconds over six years are associated with the inner core movement.

"The idea the inner core oscillates was a model that was out there, but the community has been split on whether it was viable. We went into this expecting to see the same rotation direction and rate in the earlier pair of atomic tests, but instead we saw the opposite. We were quite surprised to find that it was moving in the other direction," said Vidale.

"The inner core is not fixed - it's moving under our feet, and it seems to going back and forth a couple of kilometers every six years. One of the questions we tried to answer is, does the inner core progressively move or is it mostly locked compared to everything else in the long term? We're trying to understand how the inner core formed and how it moves over time - this is an important step in better understanding this process," Vidale continued.