AMD will be unleashing its next-gen Instinct MI300 product family in the future, the first CDNA 3-based product that will utilize 3D stacking technology. 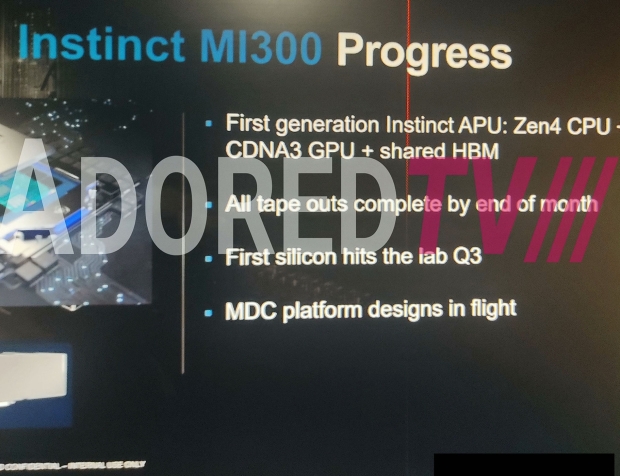 3D stacking technology will allow AMD to use CPU and GPU dies in different configurations for customers of AMD, and now we have some new leaks making things a little clearer. From a leaked slide from a purported internal presentation on AMD's upcoming Instinct MI300, AMD says the Instinct MI300 is a "first generation Instinct APU".

AdoredTV details the slides (you should be able to tell their AdoredTV's slides, I don't know if it's obvious enough or not) that one of the CPU configurations -- leaker Tom @ Moore's Law is Dead said that recently, more on that below -- with Zen 4-based CPU cores, and CDNA 3-based GPU cores.

With all of the major components on a single package -- Zen 4 CPU cores, CDNA 3 GPU cores, and HBM -- this is the world's largest (by far) x86-based APU for datacenters. AMD's next-gen Instinct MI300 looks like it pops its huge APU head up in the leaked slide, where we can see at least 6 HBM stacks and what appears to be a socketed processor.