A study on the drone swarm titled "Swarm of micro flying robots in the wild" has been published in the journal Science Robotics.

Researchers from Zhejiang University have created a purpose-built swarm of ten palm-sized drones, each equipped with depth cameras, altitude sensors, and onboard computers, that can navigate through unstructured environments with obstacles such as a forest.

The drones don't rely on any external infrastructure like GPS and are instead powered by flight algorithms that incorporate collision avoidance and coordination throughout the swarm. Researchers tested the drones in multiple scenarios; a dense bamboo forest, a high-traffic experiment where they had to avoid other drones, and following a human target.

Real-life applications could include surveys of natural disaster zones, but military applications of drone swarms have also caught the eye of institutions like The Pentagon, which is conducting its own tests. 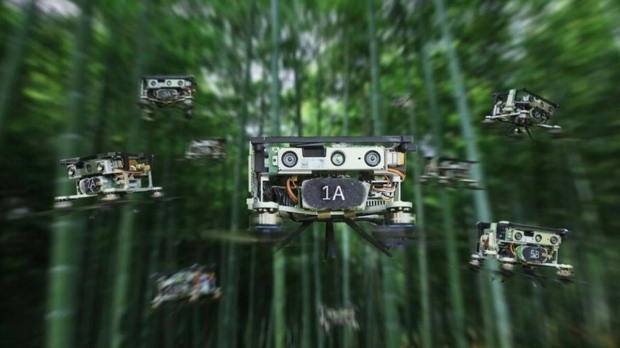