Taipei-based Chinese Television Systems, a TV network that is partly owned by the Taiwanese government, had a ticker at the bottom of its screen at 7 AM local time on Wednesday alerting everyone that Taiwan had been invaded by China. 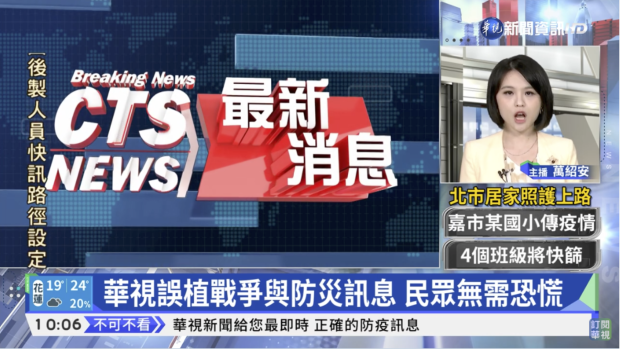 The graphic on Taiwan TV read: "New Taipei City has been hit by a Chinese Communist guided missile. Ships in Taipei Port have exploded, damaging facilities. Banqiao Station is reported to have been set on fire by explosives placed by special forces".

The Ministry of National Defense had asked municipal governments to include the Chinese invasion scenario in a video as part of an annual drill, Huang De-ching, commissioner of the New Taipei City Fire Department explained: "This is for the drill of national defense mobilization and disaster prevention. The Defense Department asked us to include the scenario of a China attack. So we have that scripted in the start of the video".

Bloomberg is the source on this news, just like they were on February 5, 2022 when they reported that Russia had invaded Ukraine... 19 days before Russia invaded Ukraine. With rumors and I'm sure a lot of propaganda, let's pray that unlike Bloomberg's early report on Ukraine, that that China does not invade Taiwan.