Jennifer Zeng has posted an alarming new tweet, bringing attention to an even more alarming video that was uploaded to a Chinese military channel called Liu Jun Tao Lue which threatens full-scale nuclear war with Japan.

The video proposes that the CCP would punish Japan beyond description if the country was to use a single soldier, plane, or ship -- and that not only would it return fire, but it would start a "full-scale war against Japan". First, they would drop nuclear bombs, they would drop nuclear bombs continuously... until Japan declares "unconditional surrender for the second time".

The CCP wants to squeeze Japan until it bleeds out, as it would target their ability to endure a full-scale war. China knows that Japan can't afford a full-scale war, so it would be foolish for the country to send troops to the Taiwan Strait.

In the video, the CCP warns that it developed and successfully detonated its first nuclear bomb in 1964 -- promising the world it wouldn't use nuclear bombs against non-nuclear countries. 60 years have passed, and the world has changed -- in more ways than one.

The video explains: "Our country is in the midst of a major change that has not been seen in a century, and all political policies, tactics and strategies must be adjusted and changed in the midst of such a major change. In order to protect the peaceful rise of our country, it is necessary to make limited adjustments to our nuclear policy".

China warns that Japan has been the first to hurt the Chinese many times over the years, with the First Sino-Japanese War in 1894-1895, and the War of Invasion of China in 1931-1945, where over 35 million Chinese were killed and wounded.

The video provides some get-in-your-nuclear-bunker scares with "If Japan goes to war with China for the third time, the Chinese people will take revenge on the old and the new scores".

This is all about Taiwan, as China says that it is singling out Japan as an "exception" to not using nuclear bombs first on the world. The CCP is "warning Japan and informing the world that if Japan interferes militarily in our domestic affairs, including the unification of Taiwan by the mainland, nuclear weapons will surely be used against Japan, and will be used continuously until its unconditional surrender. There will be no peace talks in the meantime, and we will take back the Diaoyu Islands and the Ryukyu Islands. We will either manage them or let them be independent". 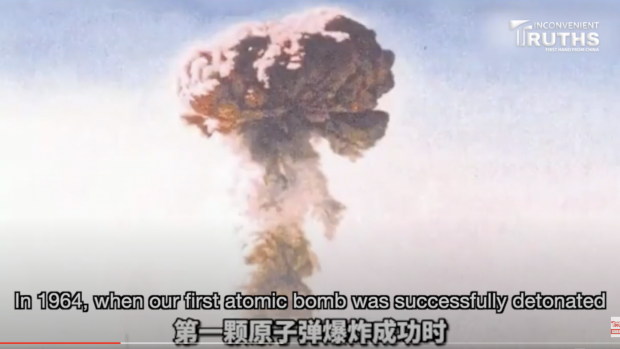