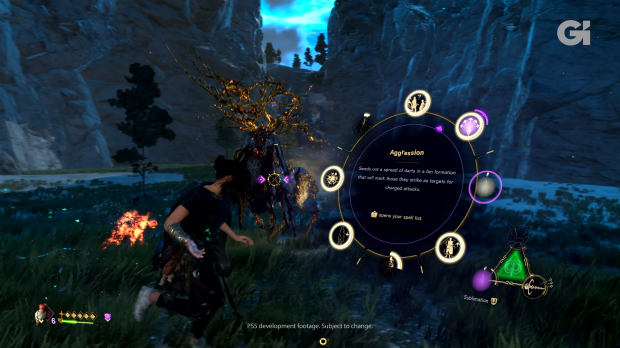 Forspoken has a strange on-screen UI. Magic spells and abilities are presented in a wheel formation, which is pretty standard for most RPGs. Hold a button, time slows down as a wheel pops up, you select and ability, and then perform said ability. All pretty straightforward stuff.

What isn't straightforward--or even straight--is the actual UI itself. The wheel is tilted at an angle, making things unnecessarily more difficult to read. The presentation is meant to be stylish--this is Luminous Production's new savvy action RPG with slick combat, a bombastic protagonist, and incredible-looking traversal. But in reality the UI is just...awkward. It offends the eye and looks like something that should be in a VR game where angles are constantly changing as you move around a 3D space. 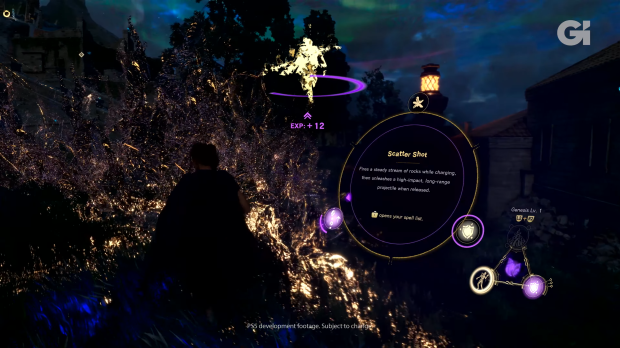 What's interesting is certain elements aren't tilted; on-screen indicators and diagrams for level ups and EXP progress are straight, as are the basic tooltips noting that you've picked up an item or unlocked a new note.

A good UI is essential for any RPG. You're going to spend a fair bit of time organizing/switch spells to pull off combos and adjust your build for specific battles.

The new gameplay footage confirms that the content is subject to change so the UI could be adjusted before the final product is shipped out on October 11. I hope there's at least an option to turn off the curved UI.