It was only last week the sun released a coronal mass ejection (CME) blast towards Earth, causing moderate geomagnetic storms.

Now, observatories have honed in on an active sunspot region that has produced two solar flares on March 15, at M.1 and M1.6, respectively. Dr. C. Alex Young, a NASA heliophysicist, or sun scientist, announced that the solar flares caused shortwave radio blackouts over the Atlantic Ocean and the Pacific Ocean, followed by a predicted R1 warning from the National Oceanic and Atmospheric Administration Space Weather Prediction Center (NOAA).

The below image was captured by a Solar Dynamic Observatory that showcases the sunspot region AR12965 on March 14. This sunspot region caused most of last week's solar activity with geomagnetic storm activity and an increased chance of auroras. EarthSky reports that this active sunspot region still has the potential to produce more solar flares. SpaceWeather.com reported that a filament of magnetism located on the sun's southern hemisphere snapped and exploded, which may cause a CME to impact Earth on March 14. 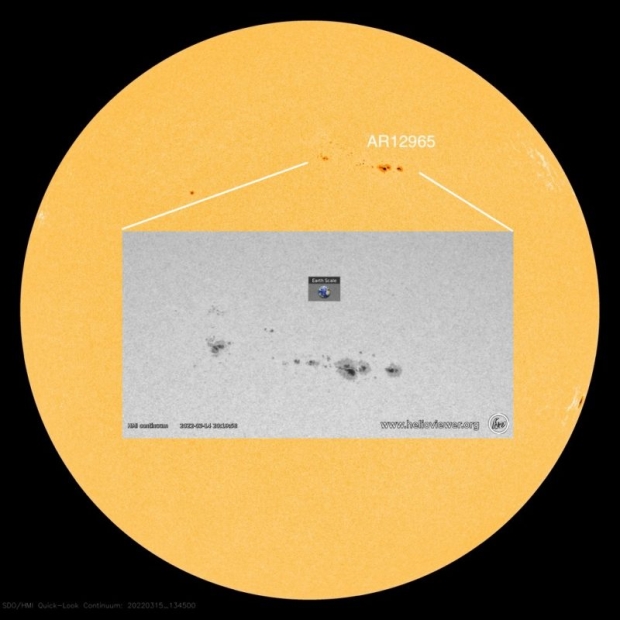 "On March 13 [2022], an unstable filament of magnetism in the sun's far-southern hemisphere exploded. The resulting CME could deliver a glancing blow to Earth's magnetic field on March 17. Minor G1-class geomagnetic storms are possible if/when the CME arrives," wrote SpaceWeather.com

If the CME does impact Earth, it's likely that it will only produce minor to moderate-level geomagnetic storms. However, this solar activity highlights the sun's 11-year process of moving into its coming solar maximum, where the most activity occurs.