The video shows Zelenskyy requesting his country's army to surrender to Russian forces and was displayed on the website of a Ukrainian television channel, Ukraine 24 after it suffered a hack. A transcript of the video was also displayed briefly on the channel's televised broadcast. The video is not among the most convincing deep-fakes out there but marks one of the first uses of the disinformation tactic in the current conflict.

"The running line of the "Ukraine 24" TV channel and the "Today" website were hacked by enemy hackers and broadcast Zelensky's message about alleged "capitulation" THIS IS FAKE! FAKE! Friends, we have repeatedly warned about this. No one is going to give up. Especially, in the circumstances when the Russian army suffers losses in battles with the Ukrainian army!" Ukraine 24 wrote in a Facebook post.

Zelenskyy has issued a video in response on his Instagram account addressing the deep-fake, saying, "If I can offer someone to lay down their arms, it's the Russian military. Go home. Because we're home. We are defending our land, our children and our families." With a response by Zelenskyy himself, the deep-fake is unlikely to have much of an impact, but there may be more to come. 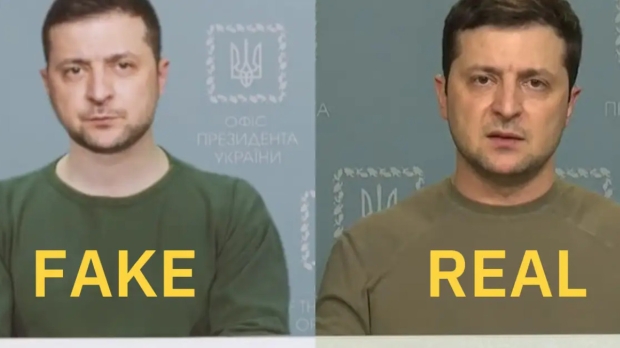