Russia began its invasion into Ukraine on February 24, and since then, residents of both countries have been moving their wealth into cryptocurrency.

According to a new report released by Arcane Research, Ukrainians are purchasing Bitcoin and Tether like they never have before via the world's largest cryptocurrency exchange, Binance. According to the report, Ukrainians are purchasing Bitcoin and Tether with the hryvnia, Ukraine's native currency, currently worth about $0.033 USD. Right before the Russian invasion on February 24 the trading pair Tether/Hryvnia saw its 24-hour trading volume increase from $6 million to $8.5 million, when usually it doesn't exceed $3 million.

Read more: Russia government to seize $560 billion from citizens if this happens 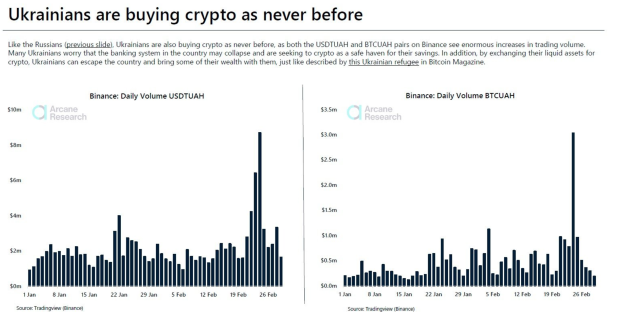 "Like the Russians, Ukrainians are also buying crypto as never before. Many Ukrainians worry that the banking system in the country may collapse and are seeking to crypto as a safe haven", states the report.

Read more: Bitcoin's total value is now worth more than Russia's own currency