All NewsBusiness, Financial & LegalCases, Cooling & PSUContests & GiveawaysCPU, APU & ChipsetsDealsDisplays & ProjectorsGamingMotherboardsScience, Space & RoboticsStorageVideo CardsVirtual & Augmented Reality
All ReviewsAll ArticlesAudio, Sound & SpeakersCases, Cooling & PSUCPUs, Chipsets & SoCsComputer SystemsDisplays & ProjectorsGamingMotherboardsNetworkingPeripheralsRAMStorageVideo Cards
GuidesGamingAsk the ExpertsNewsletterAboutForums
RTX 3090 TiRTX 4090Diablo 2GTA 6Halo InfiniteElon MuskRTX 3080HDMI 2.1
iXBT has scored a picture of Nvidia's upcoming 790i based board and although it doesn't look all that special from the pictures, it has a range of new features. Although no specifications were revealed we already know a fair bit about the chipset. It will support DDR3 memory and as such Nvidia had to design a new memory controller.

The chipset will also have native PCI Express 2.0 support, although from what we've heard this will not be for all three x16 slots due to chipset limitations, but there should be some spare lanes for accessories. 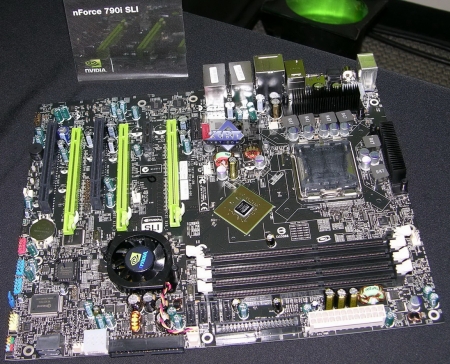 This could well be because Nvidia continues to use the same MCP as the 680i/780i chipset and this would be why there's still PCI Express 1.0/1.1 slots on the board. This would make sense out of a cost saving perspective since there's no real need for a new MCP at the moment.

The board has four memory slots for DDR3 memory, three x16 PCI Express slots as mentioned, two PCI slots and two x1 PCI Express slots. It also features dual Gigabit Ethernet as past high-end Nvidia boards and it looks like it has six rear USB ports, FireWire, eSATA and 7.1-channel audio with optical and coaxial S/PDIF. Unlike Intel, Nvidia has also kept the PS/2 ports.

It also appears to have a total of seven SATA ports, although it's hard to tell since the seventh port is very close to the iXBT watermark on the picture. Other features include a single IDE and Floppy connector, a two digita debug LED display, onboard power and reset buttons, headers for a further four USB 2.0 ports and one FireWire port and that pretty much sums things up.

Time will tell if this will end up as another "Designed by Nvidia" board or if it's just a reference design. Hopefully the motherboard manufactures will spend some time and make their own designs as we much prefer these boards than the poorly designed reference boards that's been used by some, both from Nvidia and AMD/ATI.
Newsletter Subscription