Digital video game services made the bulk of the global games industry's revenues in 2020. 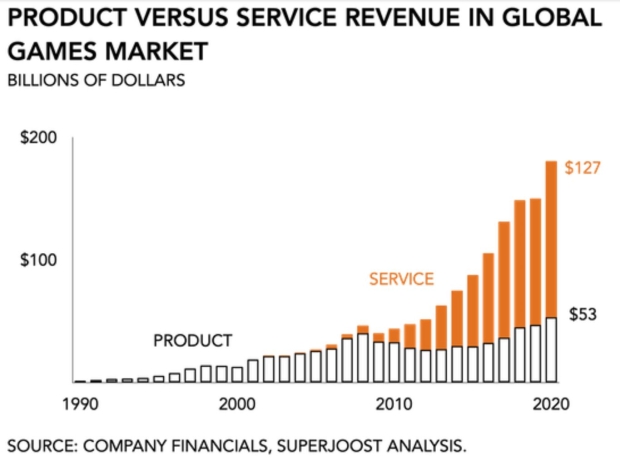 Game services have far eclipsed product sales as the market continually shifts to a lease-based subscriptions, live games, and engagement-driven business models. According to figures from analyst Joost Van Dreunen, services including the likes of Xbox Game Pass, PlayStation Plus, and free-to-play live titles made up 70% of 2020's global games industry earnings.

The worldwide games market generated $180 billion in 2020 due to stay-at-home measures. Services accounted for roughly $127 billion according to SuperJoost analysis, whereas products--game sales, accessories, etc.--made up $53 billion.

Practically all of the major games-makers and platform-holders earned record numbers throughout 2020 driven by consistent software and services revenue as well as the launch of new consoles like the PlayStation 5 and Xbox Series X/S duo. Nintendo made 15% of North America's gaming revenues in 2020 ($6.8 billion out of the total $42.83 billion), Sony hit over $22 billion in revenues during the year, and Xbox managed to pull in a record $10 billion in yearly revenues through June 2020 - 2021.