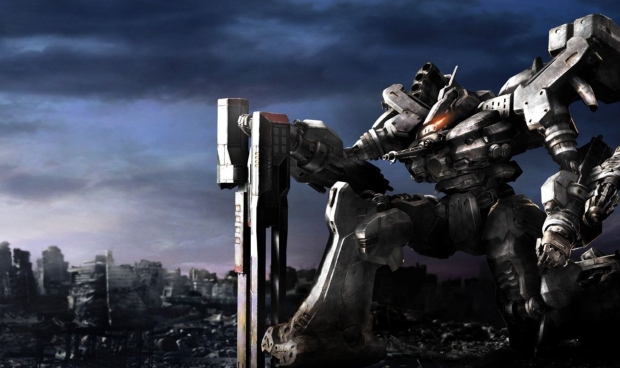 It looks as if FromSoftware's new Armored Core game is back on track. One ResetERA user claims to have taken a NDA consumer survey that showed screenshots and a snippet of gameplay, including boss fights and world exploration. There's a description that we've transcribed below, but it's worth mentioning the original purported screenshot has a spelling error, and the story also focuses on melange, which is the name of the spice in Dune. This could possibly result in copyright infringement.

The leak describes all the hallmarks of Dark Souls, including hulking bosses, an intriguing story arc with layered lore, and brutal survival combat. FromSoftware is also blending the distinct third-person action combat and customization the Armored Core series is known for, including a staggering array of swappable mech parts and gear.

This isn't the first time we've heard about this project. In 2016, FromSoftware confirmed it was making a new Armored Core game.

FromSoftware's current project, Elden Ring, has been in development since Dark Souls III shipped and will release on February 22, 2022 on PS4, PS5, Xbox One, Xbox Series X/S and PC.

Check below for a transcription of the reported Armored Core leak:

Melange, an unknown substance that could dramatically advance human society. In the past, this substance caused a cosmic catastrophe on planet Bashtar that engufled the surrounding star systems, and eventually its very existence was lost.

Decades later, the Melange reaction was confirmed again on planet Bashtar. In search of the unknown substance that should have been lost, various speculations begin to swirl. Various parties are getting involved; the government, corporations, cultists, and unknown mercenaries...The protagonist is one of them.

The game is a TPS (third-person shooter) mecha action title that lets you move around an overwhelming scaled map that represents a unique sci-fi world with dynamic mech action. You will face strong enemies and fierce battles both long and short range using guns and blades.