The NFT market has amassed a huge $22 billion in trading volume in 2021, analyst firm DappRadar reports. 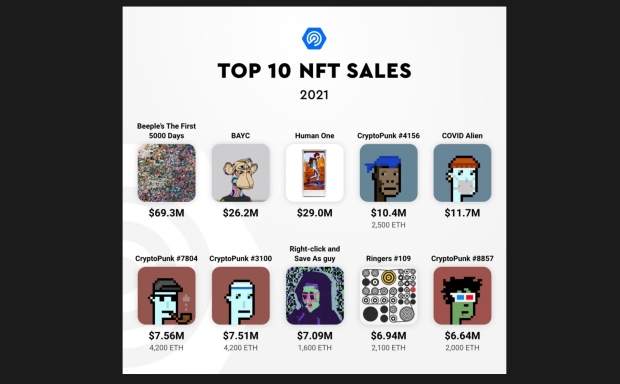 A new report from DappRadar outlines the emerging NFT trends that've taken 2021 by storm. The firm estimates that NFT volume trading has hit $22 billion throughout 2021, with a market cap of $16.7 billion based on the top 100 NFT collections, including heavy-hitters like Bored Ape Yacht Club ($26.2 million), Beeple's renowned The First 5,000 Days ($69.3 million) and Human One ($29 million), and CryptoPunks ($37.17 million total).

The report succinctly outlines emerging trends in the blockchain gaming space, discussing play-to-earn and GameFi. Startups have raised over $4 billion in capital to fund play-to-earn blockchain games, including Animoca Brands, who received a hefty investment from Ubisoft (and who is also making a Bored Ape Yacht Club video game). Other play-to-earn proponents include Gala Games, who is publishing Peter Molyneux's new game Legacy with its minted land NFTs, and Certain Affinity's new FPS, which pledges to be the very first play-to-earn AAA shooter. 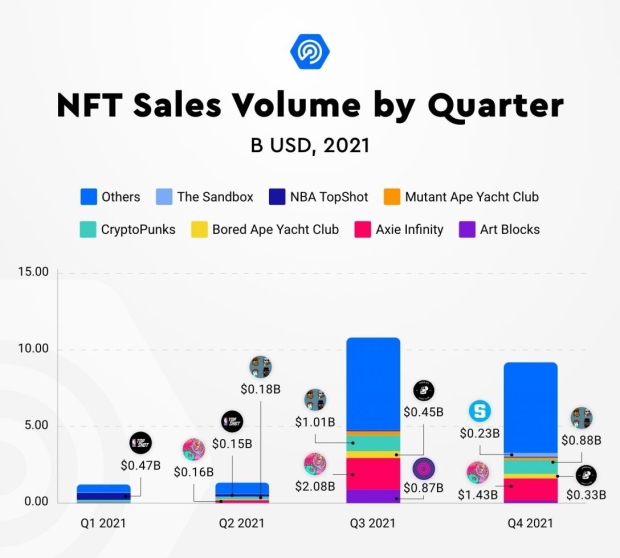 "GameFi, one of the hottest buzzwords in the cryptoverse, is a portmanteau of "Game" and "Finance." It describes the gamification of financial systems to create profit from playing play-to-earn crypto games." 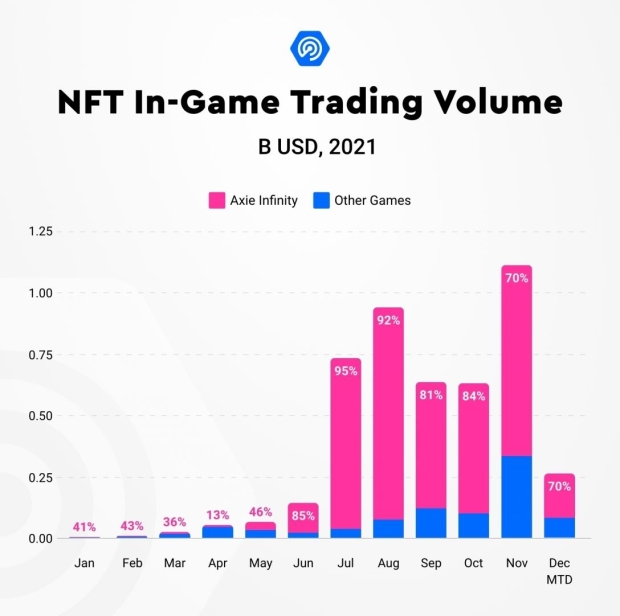 The idea is to give players a stake in the actual game itself, turning users from linear consumers into webworked investors. Because gamers earn tokens and directly affect market prices of said tokens and the union of in-game and real-world economies, players then have a direct impact on the game's financial outcomes outside of traditional purchasing. It's almost like an industry within and industry, but it's not without sobering issues like security; DappRadar notes that the crypto-NFT market has lost over $1.9 billion in 2021 due to scams and hacks.

Case in point: Fractal, the new NFT marketplace from Twitch co-founder Justin Kan, was recently manipulated in a scam worth $150,000.

Blockchain gaming and NFT integration is just beginning, and DappRadar's Pedro Herrera says it's more than just adding play-to-earn schemes within existing games. Developers have to actually make the games good first, which is something we've outlined extensively in our Engagement Cycle flywheel.

"In 2022, I feel the focus will shift from simply involving blockchain, to seamlessly integrating it. As more and more games hit the market, it won't be enough to simply be 'play-to-earn'. Is the game fun to play? Is the integration of NFTs and cryptocurrency intuitive? Is the in-game economy open-ended and well-balanced? To me, these are the factors that will determine which projects build a lasting user base."