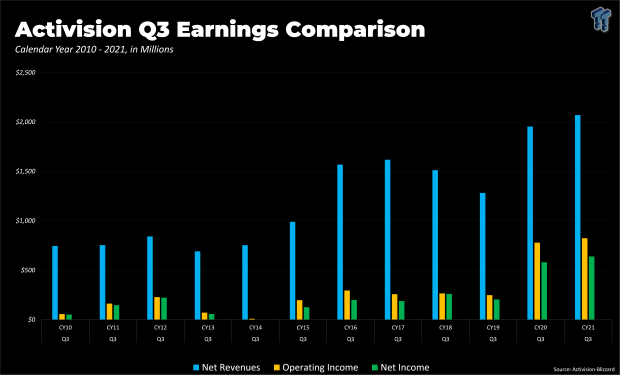 Activision-Blizzard just enjoyed an explosive Q3 (they aren't, however, enjoying the explosive controversy stemming from workplace misconduct). The company's net revenues, operating profit, and net income all set record highs for a Q3 period. In short, this recent quarter was Activision's best Q3 in the last 10 years.

The billion-dollar games-maker has generated a whopping $2.070 billion in net revenues driven by Warzone, Call of Duty, World of Warcraft, and huge sales from Diablo II Resurrected, which turned out to deliver the best first-week sales of any remaster in Activision-Blizzard's history. Q3 2021 also was the 5th highest quarterly period for net revenues in the last 10 years. Predictably, Activision-Blizzard made 90% of its revenues from digital.

Operating profit was at $824 million, driven by Call of Duty, Diablo II Resurrected, and continued earnings from online games. Net income is $639 million, the third highest point in 10 years.

Overall Q3 was a huge period for Activision-Blizzard...however Q4 is a different story. We'll have a closer look at that in another article.

Activision-Blizzard Q3'21 at a glance 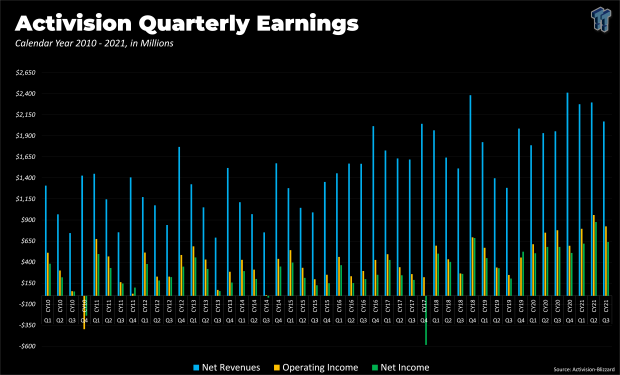