Dying Light 2 has been delayed nearly 60 days and will now release in 2022, Techland confirms. 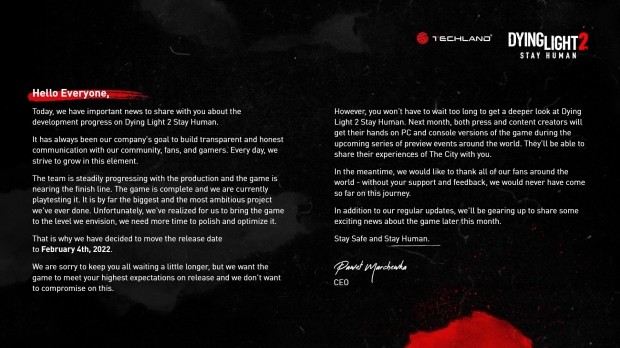 Dying Light 2 has been pushed back from its original December 7, 2021 release date to February 4, 2022. Techland says this decision was made to ensure the team can "polish and optimize" the huge reactive open-world of Dying Light 2, but we're willing to bet the congested holiday season was also a determining factor (Halo Infinite would've released one day after Dying Light 2, for instance).

"The team is steadily progressing with the production and the game is nearing the finish line. The game is completed and we are currently playtesting it. It is by far the biggest and most ambitious project we've ever done," the studio wrote.

"Unfortunately, we've released for us to bring the game to the level we envision, we need more time to polish and optimized it."

Dying Light 2 is indeed the largest Techland project; the game is , 400% bigger than Dying Light 1, complete with an innovative reactive world state system called City Alignment that allows you to shape the world with your choices.

The sequel is also confirmed to run at up to 120FPS on PS5 and Xbox Series X hardware.