The Xbox Series X's internal PCIe 4.0 SSD can technically be replaced, but only with a cloned drive from the exact same console...and a Series X SSD doesn't work on an Xbox Series S console. 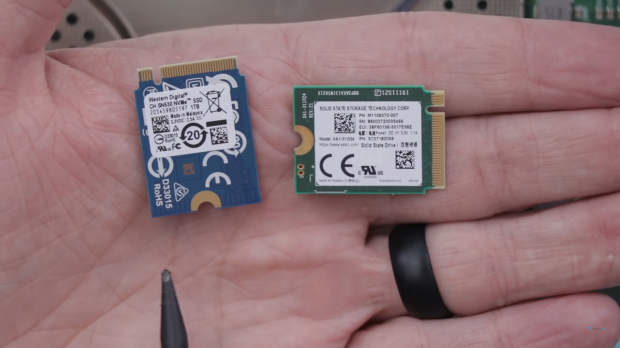 According to YouTuber TronixFix, the Xbox Series X's internal SSD is apparently replaceable, but there's a catch: The replacement drive has to be a cloned version of the console's original drive.

Tests from YouTuber TronixFix confirm that the Series X's internal SSD has custom features that are essential to the console's operation, and the system won't power up unless the original drive--or a clone of the original drive--is installed. You can't just go out and buy a M.2 2230 SSD, slot it into the Xbox Series X's internal socket, and expect it to power up and operate. This is likely due to the custom ASIC that enables PCIe 4.0 (Gen4 x2) on the internal Xbox WD SN530 drive.

On top of the ASIC, this is to be expected as all Xbox consoles require special partitioning and OS software to be installed onto the drive in order to boot. For example, when I replaced the Xbox One's 2.5-inch HDD years ago, I had to use Linux to create special partitions on the new drive and download the latest console firmware for it to boot.

The test was conducted with two internal Xbox Series X SSDs from two separate consoles. The SSDs are actually different models, one being the custom WD CH SN530 SSD and another a XA1-31512 model SSD from Solid State Technology Group. The off-the-shelf third-party drive was a 1TB Sabrent M.2 2242 (SB-1342-1TB) SSD that delivers up to 2.5GB/sec speeds, which meets the Series X/S's speed threshold.

What's interesting is that one Xbox Series X SSD can't be transplanted into another separate Xbox Series X. Like the PS4, gamers can't swap internal Xbox Series drives between two systems. The internal SSD only work with the original hardware similar to a Windows 10 OEM copy.

That being said, someone was able to take an original internal Xbox Series X SSD, hook it up to a CFExpress card reader, and slot it into an Xbox Series S' expansion card port. The console recognized it as external storage as if it were one of Seagate's 1TB expansion storage modules.