The crypto gimped performance has been interesting to say the least, with more on that below -- but NBMiner has now pushed out an update that ungimps performance by up to 70% which is big news... at least for now. The new NBMiner update doesn't instantly unlock the mining performance on the GeForce RTX 30 series LHR cards, but rather provides you with the ability to adjust some vaues that will boost mining performance.

NBMiner's new update will let you adjust values that works out the maximum unlockable hash rate for your specific LHR-series gimped GPU, with up to 68% more performance achieved when mining Ethereum on the ethash algorithm. Not bad at all.

Every single GeForce RTX 30 series GPU that is produced right now, bar for the flagship GeForce RTX 3090, are gimped with LHR -- but the thing is NVIDIA isn't clear with its AIB partners on gimping their GeForce GPUs for reduced crypto mining performance.

AIB partners are dragging out the process on re-tooling their production lines to gimp RTX 30 series GPUs with their LHR crap, and now these NBMiner updates only help miners. 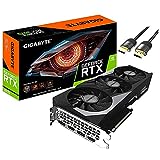