I thought it was just me, but when Jensen Huang hosted NVIDIA's all-virtual GTC 2021 keynote, I thought his kitchen looked a little... I don't know, underwhelming for a billionaire. Well, maybe it was because the entire NVIDIA GTC 2021 keynote was digital. Yeah, they "faked" seconds of it with CGI -- from 1:02:41 to 1:02:55 and nobody... absolutely freaking nobody noticed.

This is an Iron Man-like moment for NVIDIA... providing that they can fake an actual CEO with next-gen deep fake-style technology. It's actually absolutely mind-blowing, but as what pop culture would refer to me as a "conspiracy theorist" it isn't so surprising.

Rather, it shows that you literally can't believe what your eyes see -- so while this is a very cool party trick, it is a tease of a haunting future. If the world doesn't go back to normal, and it probably won't -- then all virtual events right up to "appearances" of President Biden could be faked.

Hell, it's something I noticed right here at the 7-second or so mark of this video.

And if you think that video has been altered... don't worry, even USA Today has "fact-checked" it and confirmed that the video itself is completely unaltered. So "President Biden" has his "hand" go through the mic, conspiracy theorists scream out -- hey, something fishy here -- get shot down.

Nekminnut, NVIDIA's billionaire and Iron Man-like Jensen Huang, is completely faked for an entire GTC 2021 keynote and no one even noticed.

Impressive isn't even the word I want to use, mind blowing is. 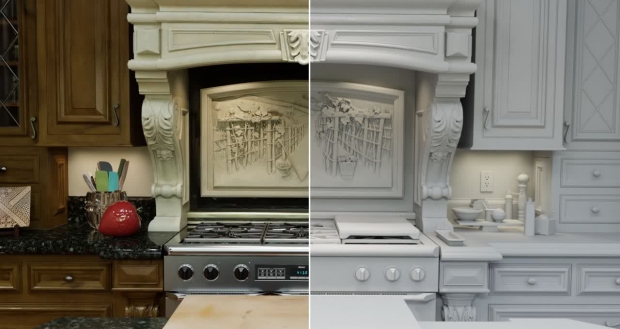