The PlayStation 4 has shipped less than 1 million units for the first time in Sony's Q1 FY21 as the console reaches peak saturation. 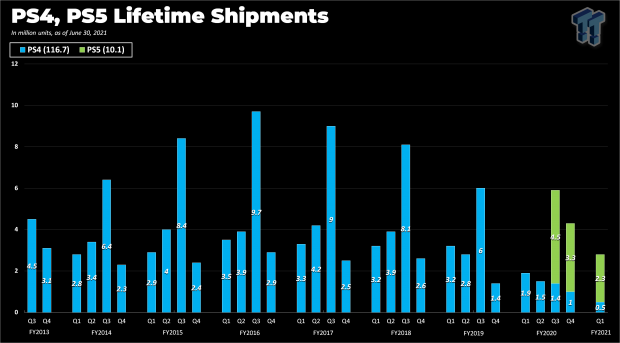 Sony today announced Q1 FY2021 earnings and updated sales figures for PlayStation hardware. The results send a clear picture: The PS4 is on its way out, and fast. Sony shipped roughly 500,000 PS4s in Q1 as compared to 2.3 million PS5s.

The PlayStation 4 has now shipped 116.7 million units to date as per Sony's refreshed figures. On the next-gen front, Sony shipped 10.1 million PS5s to date, and recently reached 10 million console sales to make the PS5 the fastest-selling console in Sony's history (note: sell-in is shipments sent to retailers, and sold-through represents actual confirmed sales to consumers).

Despite the drastic slow-down in hardware shipments, Sony still expects over 70% of its FY21 revenues to come from PlayStation 4 consoles. This is rightly so given the system's strong install base of highly-engaged users, and because PS5 stock is still restricted due to high demand.

With the PS5 starting to overlap quarterly sales, it's highly unlikely the PS4 will beat the PlayStation 2's mighty 155 million reign.

Sony says it will support the PlayStation 4 into 2023.