Activision-Blizzard has upwardly revised its total-year 2021 earnings forecast and now expects to earn a record-breaking $8.5 billion. 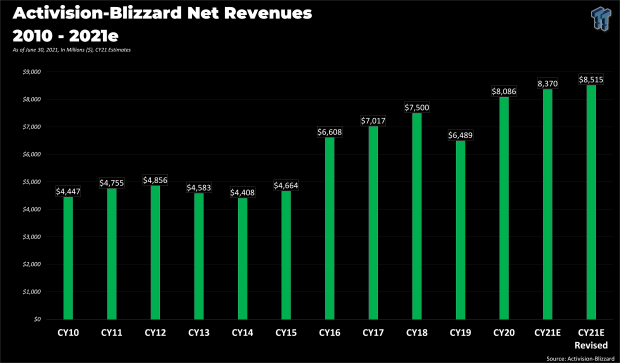 While a storm of controversy hangs over Activision, the company's earnings performance is doing better than ever. Activision-Blizzard's Q2 2021 results outperformed across every metric, raking in the best net revenues ($2.296 billion), operating income ($959 million), and net income ($876 million) in a second quarter period in the last 10 years. EPS also beat expectations with $1.12 per share.

Activision has now boosted its original full-year earnings predictions based on these results and now targets a whopping $8.515 billion for CY 2021, up $145 million from the previous forecast.

The company's confidence lies in strong sales and monetization of Call of Duty products including this year's mainline game from Sledgehammer, new Warzone content, and CoD Mobile, as well as sales from new games like Diablo II Resurrected continued revenues from titles like World of Warcraft and Overwatch.

Company stock is starting to climb on the news of high Q2 earnings, but the ongoing harassment and discrimination policy has kept the publisher mired in controversy and investors and attorneys alike are watching closely.