Richard Branson is now up above us chilling in space, rocketing up into the black abyss in his own Unity 22 rocket ship, for a quick 15 minute trip.

While most people are told to stay home and inside from the pandemic, Branson got about as far as anyone can get from the planet with the 71-year-old billionaire has beat fellow billionaires in Jeff Bezos and Elon Musk into space. Speaking of Bezos, the Amazon founder and former CEO will be going up to space for his own trip in just 9 days time.

Branson was watched by his family and over 500 people watching in the crowd, there were 5 crew on-board the Virgin Galactic plane. The craft detached from the mothership at an altitude of around 13 kilometers, firing its engines to get Branson and the crew up to around 88 kilometers above our pale blue dot.

Before he had his journey up into space, Branson signed the astronaut log book with: "The name's Branson. Sir Richard Branson. Astronaut Double-oh one. License to thrill".

Branson himself tweeted: "I was once a child with a dream looking up to the stars. Now I'm an adult in a spaceship looking down to our beautiful Earth. To the next generation of dreamers: if we can do this, just imagine what you can do". 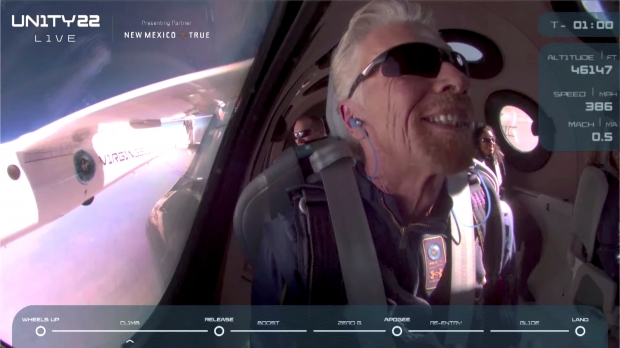